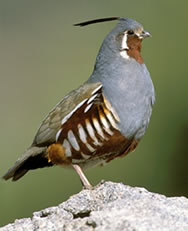 The mountain Quail's range is Western North America; from Washington south to northern Baja California with a habitat of mixed evergreen forests and woodlands. Mountain quail are the largest of six North American quail, averaging nine ounces in weight. They are easily distinguished by the two long, thin head plumes and by the chestnut-colored sides boldly barred with white. The male and female are monomorphic but females tend to be duller and have a shorter plume. The crests are black and consist of only two feathers, the female's crest is usually shorter and more brownish than the male, otherwise the sexes are similar.
SIZE:
Approximately 26 to 29 centimeters (10½ to 12 inches) with a wingspan of 35-40 cm
Approximately 200 to 255 grams (7 to 9 ounces)

Mountain quail are secretive birds that inhabit a diverse range of habitats, but typically occupy dense brushy slopes in foothills and mixed conifer forests. Mountain quail populations tend to focus around riparian areas and also do well in brushy thickets resulting from fires or clear-cuts.
Their diet consists primarily of plants that are seasonably available. These include berries, seeds, acorns and even mushrooms. They will also eat insects. Young birds need protein for their development, so approximately 20 percent of their diets are insects.

The mountain Quail's breeding season is late March & early April to June. With a clutch size of 6 to 15 eggs with a color of pale buff to cream and take 24 to 25 days to incubate. Nests are often highly concealed by an overhead cover of shrubs, inside bunchgrasses, under downed logs a stump, a tree, or other object which provides cover.

Mountain Quail do very when kept in large aviaries with lots of evergreen branches for them to perch and hide. A hardy species, they are very adaptable and can withstand both extremes of temperature. Artificially reared chicks are prone to toe picking. Can be controlled by placing alfalfa hay on bottom of brooder, use dimly lit brooders and/or trim the upper beak back about 1/3. If you need to feed mealworms to encourage the birds to eat, cut into small pieces and only feed for a few days (the worms resemble toes).

Search the Web for More information on Mountain Quail at LookSeek.com Search