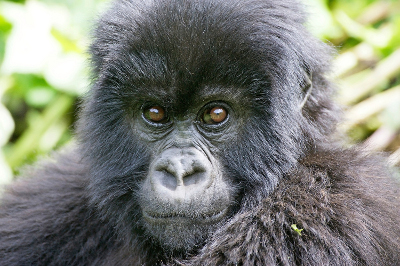 The Mountain Gorilla is the largest of the gorilla species / subspecies. Males Mountain Gorillas often weigh more than 500 pounds (226 kg). They have longer and darker hair than their lowland cousins, and they lack the reddish patch of hair on their heads lowland gorillas usually have. Their heads are more pointed, though this is not a response to the colder environment like their thicker hair. The Mountain Gorillas have a wider gap in the middle of their nose. The Mountain Gorilla are also the most endangered group; though there are a few hundred more Mountain gorillas than Cross River gorillas, they are adapted to the mountains and thus can’t migrate a few hundred miles to better grazing areas. Gorillas of all species / subspecies reach sexual maturity at seven to eight years of age but don’t breed until ten years of age. Female Mountain Gorillas have a baby after eight to nine months of gestation that is then nursed for three years. Mountain Gorillas only have three to four young in their lifetimes, meaning their populations are slow to rebound even if predation stopped.

Mountain gorillas are herbivores, meaning they only live on plants. In the face of habitat loss, the mountain gorillas have been forced to raid human farms for foods. This has exposed them to diseases like tuberculosis and scabies.

The Mountain Gorilla was popularized by the efforts of Diane Fossey and the 1986 movie about her work, “Gorillas in the Mist”. Diane Fossey began studying them in 1963. Fossey realized that the mountain gorilla was critically endangered due to habitat loss and hunting and took it upon herself to deter hunters by tapping into local superstitions about red haired demons.

The Mountain Gorilla was discovered by Robert von Beringe, a German officer, in 1902, hence the group being called Beringe gorillas in his honor. The full species name is Gorilla beringei beringei. Before their discovery, gorillas were thought to only live in the lowlands. The mountain gorilla is an upland subspecies of the eastern lowland or Grauer’s gorilla.

Mountain gorillas share the same behavior as other gorillas. They live in groups of six to ten, led by a senior male called a silverback. The silverback decides when the group wakes up, when they move, where they rest for the night. Each adult tends to make their own nest for the night. Because the silverback has exclusive mating rights with all females in the group, he is the most aggressive. Mountain Gorillas will charge a potential threat and beat his chest in most cases. However, an adult gorilla is strong enough to rip the arm off a human.

Mountain gorillas are critically endangered in the wild, with an estimated 700 left. They only live in the Virunga mountains that border the Democratic Republic of Congo, Uganda and Rwanda. Their numbers plummeted after the Rwanda civil war and the ongoing war in Congo disrupted funding for park rangers and protection of the animals. Their habitat erosion accelerated after the wars of the 1990s, as refugees fled into the mountains and continually harvested wood from the mountains for fuel. The Mountain Gorilla have also been killed for food as part of the bush-meat trade.

Search the Web for More information on Mountain Gorilla at LookSeek.com Search