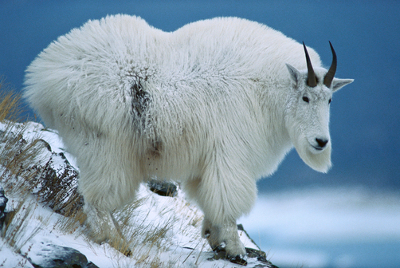 Both the female and the male Mountain Goats are bearded with long black horns and short tails. The horns measure around 6 to 11 inches (15 to 28 cm) in length and have growth rings which keep in increasing year after year. The Mountain Goats are protected from the harsh weather environment by their white wooly coats. The Mountain Goat undercoats have fine and dense wool which is covered comprehensively by a layer of long and hollow hairs. In the spring season, Mountain Goats usually rub themselves against the rocks or with trees for shedding some extra wool. The Mountain Goats wool give them special protection during the winter season where winds can travel up to 100 miles per hour (160 kph).

The male Mountain Goat usually weighs more than their female counterparts, at times 30 percent more. The male Mountain Goats have longer beards compared to the females and this sexual dimorphism can be used to easily differentiate them. In weight, the Mountain Goats weigh anything between 100 to 310 pounds) 45 to 140 kg). The body length including the head can measure up to 70 inches (20 cm) with a tail which can go up to 7 inches (17 cm) in length. The feet of the Mountain Goat are well adapted to enable them climb rocky slopes and steep landscapes. The hooves have inner pads that give them excellent traction during the climbing.

Mountain Goats are commonly found in the Cascade Range and the Rocky Mountains in addition to Alberta and British Columbia regions in the United States. Some of the Mountain Goats have been spotted in areas along the northern fringe of Chugach Mountains in the south central part of Alaska.

Among the largest mammals inhabiting high attitude areas, the mountain goats are the most conspicuous. The Mountain Goat can go up to heights of 13,000 feet (3962.4 meters ). In some instances, they can descend to sea levels especially where they border coastal areas.

The young Mountain Goats can be spotted on various instances licking handrail for salt. Because of their herbivorous nature, they spend a larger part of their time grazing. The Mountain Goat commonly eat sedges, herbs, mosses, twigs, lichens and grass. When domesticated, the Mountain Goats can also be fed with alfalfa, grains, vegetables, fruits and grass. A goat is a herbivores, that eats leaves, grass, hay and furns {plant eaters}. Mountain Goats have a four chamber stomach, goats are "Ruminant" is any hoofed even-toed mammal, that digests its food in two stages. First by eating the raw materials and regurgitating a semi-digested form known as "cud" (ruminating: chewing the cud.) then eating the cud.

Male Mountain Goats at the beginning of mating season go through a period called a "rut". The "rut" is the beginning of the courting for a nannies, a very strong foul musky odor and fighting between billies begins. The billies and the nannies undergo a mating ritual between the month of October and early December. The billies do not stick with a single partner and they mate with several. When the breeding season is over, the adult billies break into small groups of around two to three individuals. Mothers Mountain Goats will call their young so they stay close at all times, a baby goat is called a "kid". The Mother and kid Mountain Goat recognize each others calls as soon as the Mountain Goat mother gives birth. Its called "bleating" how goats communicate with each other. "Kidding" is the act of a goat giving birth.
Goats can even climb trees because they have great balance and some goat species can jump over 5 feet high. A Mountain Goats eyes are rectangular rather than round. At night the Mountain Goat have excellent vision and can due just as much at night. Both sexes, female and male goats can have beards. "Wattles" is that little tufts of hair that dangles from the goats throat. Mountain Goats can be born without or with horns "polled". The goat is one of the 12 animals in the Chinese zodiac.
Capra aegagrus hircus was derived from the Wild Goat (C. aegagrus). "Scientifically name for Mountain Goat Oreamnos americanus".

Search the Web for More information on Mountain Goat at LookSeek.com Search