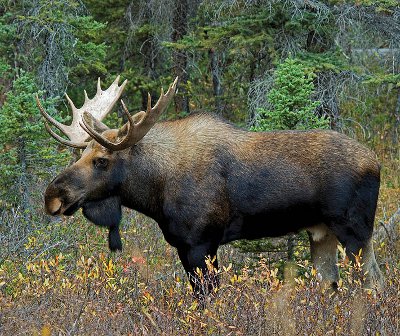 Facts about Moose, "Scientific name for Moose is Alces alces". The moose is a large member of the deer family. The word "moose" probably comes from the Algonquian languages. Moose existed in the British Isles during the Ice Age but had gone extinct by the Bronze Age. Moose disappeared from most of Europe except Scandinavia due to excessive hunting.

The moose is the largest member of the North American deer family. Moose have palmate antlers with large solid fan like structures, whereas most other deer have twig-like antlers.
Calves are up to 30 pounds (13.6 kg) at birth. Females give birth to one or two young each spring. The moose is four to six feet tall at the shoulder at maturity and can reach 1,800 pounds (816.466 kg). Its antlers can grow as large as six feet across. Moose have long muzzles and a flap of skin called the bell that dangles from its throat. Moose are a cold-adapted species; their hooves are natural snow shoes. Moose live fifteen to twenty years.

Moose live in the subarctic forests from Scandinavia to Siberia to North America.
Moose live in sub-arctic and boreal forests but do not live on the tundra. Moose eat shrubs, moss, lichen, grass and even tree bark when other fodder is scarce. Moose readily feed on aquatic plants in the summer. They will even swim several miles to reach new grazing areas. They can even go underwater for up to thirty seconds. Moose can sprint at up to 35 miles per hour (56.32 kph). They can sustain trots of 20 miles per hour (32.18 kph) for up to an hour.

Mature moose females are called cows. Mature moose males are called bulls. They bellow for mates in September and October. Calves stay with their mothers from birth until the first mating season after their births. However, they can outrun a person by the time they are a week old. Except for mating season and young with their mothers, moose are solitary creatures. Males and females will ignore each other even if grazing in the same area if it isn’t mating season.
While the moose is a member of the deer family, it is sometimes mistaken for other species. The moose is not an elk, though moose were sometimes called black moose by settlers while the wapiti was called an elk or gray moose. In fact, the elk in North America are the species Cervus Canadensis, sometimes called the wapiti by Native Americans.

Car collisions with deer kill more people than sharks, dogs, spiders and other creatures combined. Moose collisions rival deer collisions as a major cause of car accidents in Canada.

Moose numbers are controlled by human hunting and predation by animals like wolves. Moose numbers are in decline in many areas, though they’ve been reintroduced to Colorado. Their numbers are thought to be in decline due to an increase in parasites like liver flukes, the reintroduction of wolves and uncontrolled hunting. Moose used to range all the way to New England and Utah, far south of the Canadian border. They disappeared from much of the northern United States as their forest habitat disappeared under the plow.

Search the Web for More information on Moose at LookSeek.com Search