Back To Category Jellyfish
Title : 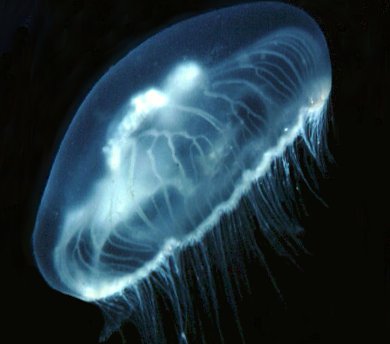 The moon jellyfish feeds on mollusks, medusa and plankton which are collected using its tentacles and brought into the body for digestion. The moon jelly is not capable of making so much movement and it be drifted with the current even when it is swimming.

It is possible to find this species in all oceans anywhere in the world so long as the waters have temperatures of 9 to 19 C (48 to 66 F). As such you will find moon jellyfish in North America along the western Atlantic coast, in northern Europe along eastern Atlantic coast, eastern Canada and New England.

Moon jellyfish can be captured and maintained in kreisel tank. The last five years have seen an increase in the aquariums of the moon jellyfish thanks to the development of the desktop aquariums.

It is however not easy to collect jellyfish for captivity. When you put wild Moon Jellyfish into an aquarium most of them die due to fluctuations in temperature and in other cases they bring troublesome algae into the aquarium. Most of the few captured jellyfish is used for public purposes and scientific research.

The Moon Jellyfish lacks respiratory parts such as lungs, gills, trachea found in other types of fish. The body of the moon jellyfish is covered with a thin membrane that it utilizes for oxygen diffusion from the water. This along with its small body helps it respire.

The Moon Jellyfish species also lacks circulatory and respiratory systems. Apart from the few moon jelly fish taken care of at public aquariums most moon jelly fish die within six months. They are usually susceptible to harsh temperatures and other forms of pollution in the waters.

Search the Web for More information on Moon Jellyfish at LookSeek.com Search