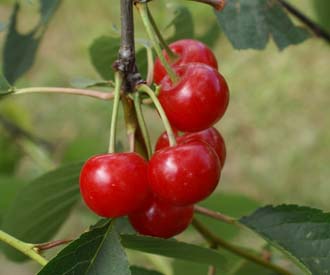 Mostly grown in the United States, France and Canada, Montmorency cherry is one of the sour cherry varieties a scientifically known as Prunus cerasus. In the United States, it is commonly found in areas such as Wisconsin, Michigan and Door County. Montmorency cherries stem from the lighter-red Amarelle cultivar. It is not to be confused and assumed to be coming from the darker-red Morello cultivar. According to research, Michigan alone produces roughly 90,000 tons of these cherries every year.


Montmorency cherry produces fruits that are light-red and large in size. Still, other trees produce darker-red fruits. In the United States, this tree can be traced back to the 20th century where it was cultivated primarily as an ingredient in the making of cherry pies, preservatives and jams. It is also common to find these cherries being marketed in a dry form, as Montmorency cherry juice or juice concentrate.

Health Benefits
In the opening years of the 21st century, Montmorency cherry has been largely publicized as a healthy food due to the health benefits that it contains. It has high oxygen radical absorption capacity (ORAC). This is the reason why powdered form of Montmorency cherry fruits is used in the manufacturing of capsules and other organic supplements and vitamins.

The nutritional composition of this cherry includes vitamins, fiber and antioxidants compounds. These are useful in the fight against serious medical problems and their associated risks. In the month of July and August, you can get fresh Montmorency cherries which are also called pie or tart cherries. Because of its unavailability in other months of the year, it is common to get it in canned, dried or frozen forms having been packed and preserved.

The Montmorency cherry has received global acclamation and has even won the Outstanding Beverage award which is given by the National Association of the Specialty Food Trade (NASFT).