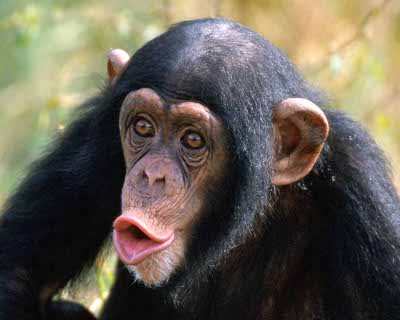 People often find monkeys appealing because of their human like characteristics, and monkeys, apes, and humans all belong to the same group of mammals called primates.

The majority of monkeys live in the tropical forests. They eat fruits, eggs, insects and on occasion small frogs and lizards.
There are two main groups: New World monkeys and Old World monkeys. Scientists use these terms to divide the world into two main parts each containing different kinds of animals. The New World consists of the Americas and the Old World includes Europe, Asia, and Africa.

The New World monkeys appear to have evolved separately from the Old World monkeys and apes for about 50 million years. As a result, they have many distinctive features. Their noses are broad and their nostrils are far apart and tend to open on the side. Their limbs are much more slender and they have long grasping tails. Old world monkeys on the other hand, have nostrils that are closer together and open in the front and none of them has grasping tails.

New World monkeys have approximately 53 different species and are divided into two groups called Cebidae and Callitricidae. They are found in the tropical forests of South America. Capuchins are typical New World monkeys; they live high in the trees and occasionally come down water. The live in small families and each occupies a certain territory. Like other monkeys, capuchins use their delicate fingers to groom themselves and each other.

Marmosets are the smallest of the monkeys. In addition, unlike other monkeys, they have claws on their hands and feet.

Other New World monkeys include the agile spider monkeys, who use their tail as a fifth limb, the Saki, which looks like an old man, the orange faced, Uakari and the noisy Howler monkeys, whose howls can be heard about 2 miles away. The gentle wooly monkey is popular in zoos and the night monkey is the only nocturnal monkey in the world.

Old World monkeys have a minimum of 78 species and are divided into two subfamilies---the Cercopithecinae and the Colobinae. The Old World monkeys include baboons, mandrills and macaques. Unlike most other monkeys, baboons and mandrills spend most of their time on the ground and only returns to the tress at night, so predators cannot reach them.

Most macaques live in Asia, but the Barbary ape, named because they look like an ape with now tail, lives in North Africa and Gibraltar. Another well-known macaque is the Rhesus Monkey, which unfortunately, is used in medical research. The Rhesus factor is the characteristic of its blood that is also found in humans.

Other Old World monkeys include the colorful guenons of Africa, the leaf easting colobus monkeys and the long nosed Proboscis Monkey.

Search the Web for More information on Monkeys at LookSeek.com Search