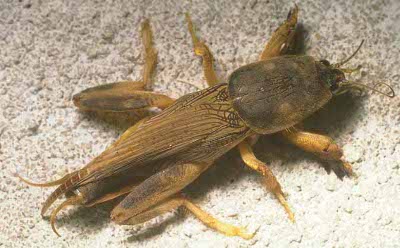 Facts about Mole Crickets, "Scientific name for Mole Cricket is Gryllotalpidae". They are in the Orthoptera order, an order the Mole Cricket shared with grasshoppers and crickets.

Mole crickets will try to dig their way out of being captured. The Mole Cricket can bite, but this is a little painful but harmless. Many mole cricket species can fly, but not all. The Mole Cricket prefer to walk over flying unless it is mating season. Male Mole Cricket have fore-wings they use to “sing” or chirp to attract mates. Some species will turn their burrow into the shape of a horn to increase the volume and range of their chirps.

Mole Crickets lay eggs in April or May. The species does the most damage in late summer and early fall, usually going senescent by Halloween. Juveniles have short wing-pads form which the adult wings will emerge, and the Mole Cricket may be mistaken for grasshoppers or dark termites at this stage.
Mole Crickets have a heavily armored head, limbs and prothorax for burrowing. Their abdomens are rather soft in comparison. All Mole Crickets have tubular bodies and powerful forward limbs. The Mole Cricket hibernate in the winter and they are nocturnal.
The Mole Cricket is a burrowing insect. Mole crickets will ruin turf grass, flowers and vegetables. Mole crickets burrow under the surface before eating the grass just below the surface. This separates the grass from the roots, killing it. They’ll eat the shoots and roots, too. Bermuda grass and bahia grass are their preferred turf grasses.

Mole Crickets don’t just eat your lawn from underneath, though this is their most common food in the U.S. They also eat insect larvae of other species, worms and the roots of plants. Mole Crickets are eaten by birds, rats, blue ants and mammal insect-eaters like armadillos and skunks. Mole crickets in East Asia are sometimes fried and eaten by people.

One sign of Mole Crickets is that armadillos and raccoons are digging up the brown patches in your lawn to get to the mole crickets to eat. Another way to determine if you have mole crickets is to sprinkle dish-washing liquid mixed in water (one ounce of soap per gallon of water) and pouring it on a two foot by two foot square of the yard; if more than three mole crickets emerge to breathe, you have a serious infestation. Mole crickets are sometimes seen as they are attracted by lights where they try to gather before laying their eggs in pockets in the soil near green grass.

Mole crickets first showed up in the U.S. around 1900, probably at a ship from the West Indies that landed in Georgia in 1899. The most common species (and genera) is common in Japan, the West Indies, Asia, southern Europe, and north Africa. Another genera is native to South America. The Mole Cricket are present on every continent except Antarctica.
Mole crickets are spreading along the American Gulf Coast, from Florida up to Georgia, Alabama and Louisiana. They’ve spread this rapidly because there were no South American predators for the species that arrived in the U.S. Pest control is starting to begin to use biological controls or biocontrols, such as introducing the Larra bicolor wasp. This wasp parasitizes young mole crickets. Larra wasps are solitary and don’t sting people unless caught.

Search the Web for More information on Mole Cricket at LookSeek.com Search