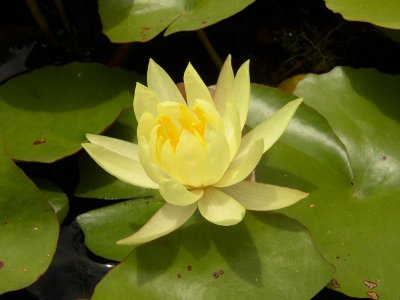 Facts about Mexican Lily plant. The Mexican Lily is a bright yellow water lily. The Mexican Lily, Sun Lotus, Banana water lily, Banana Lily and Yellow Water-lily. It is sometimes called a banana lily because its stolons have groups of small yellow roots that look like a bunch of small bananas. The Mexicana Lilysymbol in botanical references is NYME.
The Mexican Lily species is a member of the Nymphaea or water lily family and the dicot group. It was one of the two original species crossed to create the Texas Dawn water lily, now the official water lily of Texas. The Mexican lily plant has purple or brown patterns. Unlike the Texas Dawn, it remains yellow year round. Mexican lilies bloom in the summer in temperate areas and bloom year round except during the winter in near-tropical areas like southern Mexico though it has spread as far north as British Columbia. The blooms close each night before re-opening the next day.
Mexican Lily plant can grow from seeds that grown in green berry-like structures under the water or from the roots that spread from its banana like structure.
The Mexican Lily grows in ponds and streams all the way from southern Mexico to the southern United States. It is considered an invasive species and weed in areas like California where it has escaped from water gardens to foul local water ways and competes with indigenous species. Mexican Lily can grow in both fresh and brackish water.
The Mexican Lily is unusual in water lilies in that its stem holds it several inches above the surface of the water. The Mexican lily opens around mid-day and stays open until late afternoon.
When the Mexican Lily is crowded, not only the blooms but the leaves may rise out of the water.
This species is notable in that its roots are eaten by the Canvasback duck.

Search the Web for More information on Mexicana Lily at LookSeek.com Search