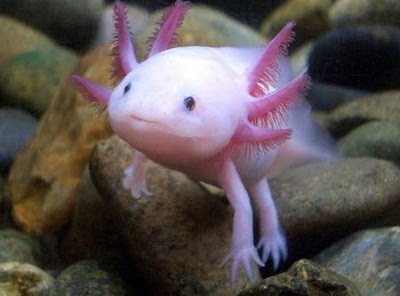 Mexican axolotls reach adulthood from 18 to 24 months. The length ranges from 6 to 17 1/2 inches (15 to 45 cm) but there are others that are 23 and these are the ones that are common. When you look at Mexican axolotls they look more like salamander larvae because they have the same external gills and caudal fin which extends from behind the head to the vent.

The Mexican axolotl have a wide head and lidless eyes. Their limbs are normally underdeveloped and have thin digits. In order to differentiate the male from the female Mexican axolotl you will discover that the females are more visible due to their wider bodies which are full of eggs. The males have swollen cloacae lined with papillae.

Since the Mexican axolotl don’t undergo metamorphosis, they don’t develop vestigial teeth. So the Mexican axolotl feed by suction whereby the rakers interlock to close the gills slits. For respiration purposes external gills are used although the can gulp the air from the surface by a method known as buccal pumping. This method is the one that is used to provide oxygen to the lungs.

The Mexican axolotl have four different colors and in this four two are mutant. The mutant is pale pink with back eyes and albino or pale pink with pink eyes. The other two are just normal colors which are brown with spots and melanoid black.

Search the Web for More information on Mexican Axolotl at LookSeek.com Search