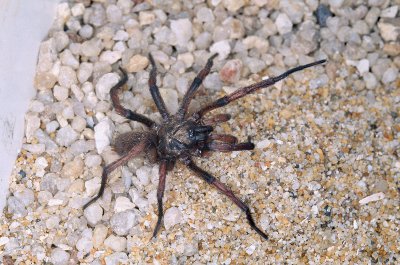 Facts about Melbourne Trapdoor Spiders, "Scientific name for Melbourne Trapdoor Spider is Stanwellia grisea". The Melbourne Trapdoor refers to a large robust spider with a brown cephalothorax and legs. Its abdomen is usually paler a dark mottled pattern on the upper surface. The male Melbourne trapdoor spiders sometimes have golden hairs on their cephalothorax, and they are smaller with longer legs than the females. It is important to note that both females and males Melbourne trapdoor spiders dig silk lined burrows in soft soil up to (40 cm) deep and there often silk strands trip lines radiating from around the burrow’s entrance.

The Melbourne trapdoor spider has large fangs which inflict a deep painful wound when bitten in rare occasions. However, there are no serious medical problems proven to be caused by the venom of the Melbourne Trapdoor Spider, even though the bite can result in a reaction which may include swelling, itching, burning or redness at the site of bite. The Melbourne Trapdoor Spider’s tail has two large appendages which are spinneret that provides base for opening of the silk glands. Melbourne trapdoor spiders are usually thought to be Sydney funnel web spiders due to its color, large fangs and size.

A Melbourne Trapdoor Spiders stomach can only take liquids, so a spider needs to liquefy their food before they eat. They bite on their prey and empty its stomach liquids into the pray which turns it into a soup for them to drink.

Search the Web for More information on Melbourne Trapdoor Spider at LookSeek.com Search