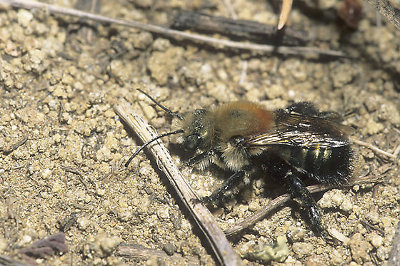 Facts about Mason bees, Scientific name of Mason bee is Osmia integra". Genus Osmia is a name that commonly refers to the species of bees. The name refers to their habit of building compartments of mud in the nests. There are about 130 species of the mason bees and mostly occur in the temperate regions. The mason bees are usually metallic green or blue in color though you can also see black varieties. They have black ventral scopae that is quite difficult to see, unless when it has pollen on it. Mason bees have arolia between the claws unlike the Anthidium or Megachile species. Unlike the bumblebees or the honey bees, the mason bees are solitary as every female is fertile and will make its own nest, and oddly there are no worker bees in the species. Basically, the solitary bees can neither produce honey or bee-wax.

The Mason bees emerge from their cocoons in spring and the males will be the first to appear. They will remain near the nest as they wait for the females. The female will emerge and will mate with the males, then the male will die and the female will start preparing their nests.

Typically the mason bee does not excavate its own nest as they prefer nesting in narrow holes they will nest in an abandoned wood-boring beetles’ nest or even a snail shell.

Mason bees are early spring pollinators that emerge when temperatures are 55 deg Fah (12.7 cel), or warmer, over a period of three or four consecutive days.
The Mason Bee is an extremely hard working super pollinators. 6 mason bees will pollinate one fruit tree, compared to 10,000 honeybees, that is why they are called super pollinators.

Mason bees are valuable pollinators of nut trees, some berries and fruit and a few early spring flowers.
A single mason bee will visit between 1,700 to 2,300 blossoms daily, while pollinate over 90% of them.

A female visits an average of 80 flowers per trip. Females determine the sex of the bee, if they will lay male or female eggs. The female Mason Bee will lay three or four male eggs for every two female eggs. The male will come out first, followed by females a couple of days later. Females will mate on the day the come from concealment and than the male dies a few days later.

20 to 35 trips are needed to collect the right amount of pollen and nectar to feed each larva. Each female lays an egg per day on average, or 35 to 37 eggs during the females short life span.
There are 5 or 6 eggs in each nesting tube. The mud wall that is built, will separates each egg and it’s food supply. About 10 trips are usually the amount needed to construct each mud wall.

Mason bees search for food in a in a 100 yard radius, or the length of a soccer field. Only the female Mason Bee will stings when she is in danger, the sting is similar to a mosquito bite.

A Mason bee has two stomachs, the first stomach is for eating and the other stomach is specially designed for storing nectar collected from flowers and water, for making it possible to carry it back to the hive.

Mason bees fall in the classification of insects with six legs. Mason bees have five eyes; three tiny ocelli eyes and two compound eyes.
The Mason bees have four stages of life, Eggs, Larvae, Pupae and Full grown Bee.
There are three types of bees in the Mason bee hive, a Drone, Worker and the Queen. A worker bee will die if she uses her stinger.
The hind legs of the Mason bees carry pollen in them and it is called a pollen baskets. Pollen is the protein for which the baby bee needs to grow.

Search the Web for More information on Mason Bee at LookSeek.com Search