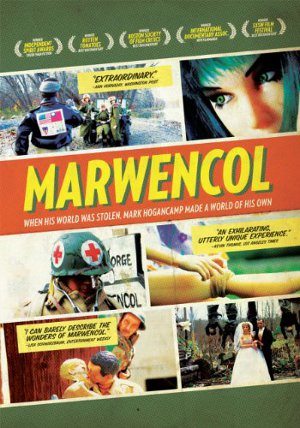 I must review an amazing documentary called “MARWENCOL”.

MARWENCOL is the story of Mark Hogencamp from Kingston, N.Y. Mark was severely beaten in a bar parking lot and left in a coma. When he awoke, all his past memories were erased forever, and he had to learn everything all over again. And after many months of therapy, the Medicare stopped , so he had to create his own therapy.

Mark wanted to know one thing “Who am I?”. The only way he could do this was to create his own world and stories, through dolls. The setting of these stories is a fictitious town called Marwencol, during World War II. This town and it’s characters that he created, are so richly detailed you can actually see the emotion in the photographs he takes, I shit you not. These creation live and breath through Mark, and he cherishes every one of them.

Director: Jeff Malmberg was able to capture the honesty of Mark and the fears that he feels about not knowing why the attack happened in the first place. As the film progresses you begin to learn more about Mark past, and the person he was before the brutal attack. Big kudos for Mr. Malmberg !!!

Everything begins to change for Mark when a Art Gallery in N.Y.C. finds out about his secret little world.

This is an amazing doc that left me in awe of Mark’s realization of who he was and who he now wants to be. The twists hit me hard, not in a bad way, but in the “This guy has balls” way. The photos alone are chilling, but his heart felt honesty is what drives it home.