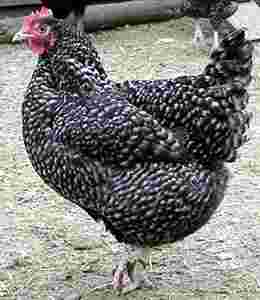 Facts about Marans Chickens. Marans chickens originated from the port town of Marans that is located in French. This is the breed that is created out of the feral chickens available locally and descended out of the chickens that are included in the fighting game and are available from India and Indonesia. During the year 1929, Lord Greenway was so much attracted by the fleshing qualities of Marans that he found in Paris exhibition. There was some restriction in the import of the livestock during that period. Some of the eggs of this breed was then smuggled to the country in the boiled form. It was much difficult for the differentiating the Continental cuckoo breeds and the cuckoo Marans during the time. These breeds could be differentiated from one another only when the eggs are seen.

There are 9 different colors of these cuckoos. They are mainly available in Colombian, white, black tailed buff, wheaten, black copper, Birchen, Black, golden Cuckoo and cuckoo. The first form of the Marans Chicken breed was much different in the appearance at the time when it was imported England. That time the only colors that was available was brassy black and white. This is the breed that comes under the standard breed than the fowl that was there in the country due to the breeding standards that are vigorous in nature.

While breeding the Marans Chickens, you should only select the dark brown eggs. This will ensure that you are keeping this gene for future breeding. The goal of Marans Chicken breeders is obtain the darkest egg color possible. The Marans Chicken can lay over 180 eggs a year.

The Marans Chickens is now officially a recognized breed of the Continental Class, by the
American Poultry Association.

Search the Web for More information on Marans Chicken at LookSeek.com Search