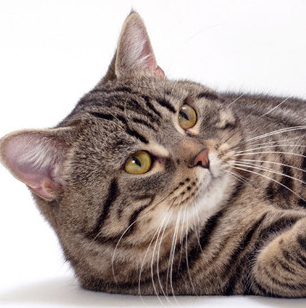 Facts about Manx Cats "Scientific name for Manx Cat is Felis Catus". Originating from the Isle of Man in the Irish Sea, The Manx Cat is an ancient cat without a tail who is calm and composed at all times. Manx Cat tends to bond more to one person rather than all the members of the household and it doesn’t fancy relocation to new homes.

Manx Cat is a stocky, solid cat who is friendly and can get along well with other household pets. Having a compact body covered by the silky double coat, it has a very short back and hind legs, which are noticeably longer than the front legs. Manx Cats average life span is around 12 to 15 years. The reason why Manx Cats can squeeze through very small spaces is that they have no collarbone and free-floating clavicle bones that their shoulders are attach to their forelimbs, that's why a Manx Cat can fit through a hole the same size as its head and they use their whiskers to determan if they can fit through the space. The Manx Cat cat has a wider chest, bigger bones and greater depth of flank than other cats. Males weigh between 8 to 12 pounds (3.6 to 5.4 kg ) while females weigh between 6 to 10 pounds (2.7 to 4.5 kg ). The Manx Cat have broad-jowled heads, which together with the ears which tappers along its length, forms a cradle shape when viewed from the back. However, the Manx Cat are slow maturing cats taking up to five years to develop fully.

A Manx Cat can climb up a tree well but can not climb head first down a tree, because all the claws on a cat’s paw points the same direction, to get down from a tree, a cat has to back down. A Manx Cat can run at a top speed of about 30 mph (48.2 km) over a short distance. This friendly Manx Cat fosters companionship with a single member of the household. Manx Cat likes playing fetch and often pounces a lot. The Manx Cat don’t voice their issues may be because of their tiny nature but they use other things to express their wishes. With even temperament, this ancient mellow Manx Cat likes meeting new people and enjoys both outdoor and indoor environment equally. Manx Cats can see at levels of light six time lower than a human, this is why cats can catch mice so easily at night.

The Manx Cat may suffer from the Manx’s syndrome caused by the recessive gene responsible for the taillessness. Also, the tail vertebrae in the adult Manx Cats may become arthritic and ossified causing a lot of pain to the cat. If the condition worsens, amputation may be necessary. Apart from these diseases,

His coat has thick short hair covered by outer flossy guard hairs. On the other hand, the long-haired Manx Cat coat is silky. This cat has wide variety of solid colors and patterns ranging from tabby to bi-color.

The younger Manx Cats (below one year old) should be fed with pet growth formula food while the adults should be fed with well-balanced diet devoid of magnesium, potassium or ash. The Manx Cat food shouldn’t be dry and shouldn’t be very moist. Plenty of clean water will do well for the Manx. Cats on average sleep 13 to 14 hours a day and when they are awake, the spend a lot of time liking themselves to keep themselves clean. Manx Cats help control rodents like small rats and mice where the live homes, warehouse, ect. A female Manx Cat is called a "queen or molly", Manx Cat is called a "tom" and the name "clowder" is called a group and young or baby cats are called kittens. Manx Cats have very sharp hearing and their sense of smell is fantastic.
Manx Cats outer ear uses 32 muscles to control it, and a human has only 6 muscles in its ear and a cat can move its ears 180 degrees. A Manx Cat can move their ears independently.

The cat's hairball is called a "bezoar" (meaning a concretion or calculus found in the intestines or stomach of certain animals, in particular ruminants, formerly alleged to be an effective cure for poison). A Manx Cats rubs against a person to not only to be affectionate but also to mark out its territory. A Manx Cats does not like water because its fur is not insulate it well when it gets wet. A Manx Cats averages about 12 whiskers on both side of its face. A Manx Cats jaw can not move sideways, there for a cat can not chew large pieces of food. A cats back is highly flexible because of its 53 loosely fitting vertebrae. The body of a Manx Cat has 230 bones. While a human body has 206. Compared to a humans who only have 34. The average Manx Cats temperature of a cat is 101.5 °F. The Manx Cats heart beats at 110 to 140 a minute, That is almost twice as fast as a human heart. A cats has 30 teeth while a kittens has about 26 teeth that they will lose at about 6 months of age. A Manx Cats has the ability to jump up to six times its length. The fear of cats "Ailurophobia".

Search the Web for More information on Manx Cat at LookSeek.com Search