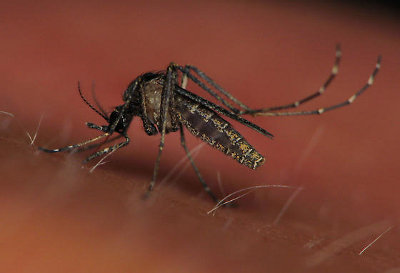 Characteristics of Mansonia Mosquito
The adults Mansonia mosquitoes are usually large in size and can easily be identified by their wing scale structure which is asymmetrical especially on the wing veins. The Mansonia Mosquito have a mixture of dark and pale scales that have a speckled appearance on the wings. Mansonia Mosquito resembles some species of Aedini, Coquillettidia and Culex. The tarsal claws of Mansonia mosquitoes are simple in structure while the abdomen is truncated in females and this distinguishes them from the aedini genera. There is no evidenced of pulvilli, a fact that sets them aside from Culex. They also have postspiracular setae a feature that distinguishes them from Old World species of Coquillettidia. The New World species of Coquillettidia has postspiracular setae but still does not resemble Mansonia Mosquito because it has a conspicuous apical band on the anterior region of the femora.

The larvae of Mansonia Mosquito have spiracular apparatus similar to that of Coquillettidia and a siphon that is modified in a distinctive manner to enable the larvae to pierce into plant tissues. However, the larva differs from Coquillettidia in that the distal part of the antennae is fused and a little bit shorter than the basal part.

Phylogenetic Relationships
According to Morphological data collected by Kitching and Harbach in a study done in 1998 there seems to be a strong correlation between the Mansonia Mosquito and Coquillettidia Mosquito. However, the phylogeny of the subgenera is yet to be investigated.

Bionomics and Disease Relations
The larvae of Mansonia Mosquito usually develop in aquatic environments permanently under close association with aquatic plants. The Mansonia Mosquito larvae attach themselves to the roots of the plants and use their siphons to pierce the gaseous tissues so as to source oxygen from the cells of the plants for respiration purposes. This prevents them from coming to the surface where they can be eaten by predators. Some larvae species burrow to the bottom of the roots cling onto the roots of floating debris. The water lettuce is commonly used as the host plant by some species of the subgenus Mansonioides. The larvae Mansonia Mosquito have adapted to detaching and reattaching themselves to the plants whenever they need oxygen. The female species of Mansonia mosquitoes are nocturnal in nature and bite hard at organisms. Most of the Mosquitoes are crepuscular- meaning appearing or active in twilight or dawn.
Mansonia Mosquito can drink blood up to three times its weight. It would take over a million bites to drain all the blood out of your body.

The Mansonia mosquitoes are considered a significant pest in the southern and central regions of America and the southern part of the United States. The Mansonia Mosquito is associated with the transmission of various arboviruses such as the Venezuelan equine encephalitis. Other species of the subgenus Mansonioides are known to transmit several viruses but more importantly they act as vectors of helminthes that cause Brugian filariasis in Southeast Asia and India. The Mansonia uniformis is largely found on the western region of Africa stretching all the way to Japan and the Australasian Region. It is known to be vector of Wuchereria bancrofti.
There are on average about 175 species of mosquitoes in the United States and more than 2,800 species of mosquitoes in the rest of the world.

Mansonia Mosquito can drink blood up to three times its weight. It would take over a million bites to drain all the blood out of your body.

Female Mansonia Mosquito can lay over 250 eggs at one time ever 3 days, for every milligram of human blood, the mosquito can lay an average of about 40 eggs. Hatching eggs will hatch into larvae in about 24 to 48 hours. Larvae soon grow to about (5 mm) in length. The eggs are deposited most of the time in clusters called "rafts", on the surface of flooded areas and stagnant water as little as one inch. The female Mansonia Mosquito will lay eggs about three times before they die.

The Mansonia Mosquito spends their first 10 days in water, which is mandatory for the eggs to hatch into larvae, named wigglers. The stagnant water is where the wigglers feed on organic matter and breath oxygen from the surface. Than the Mansonia Mosquito develop into pupae, which do not need to feed and are partly encased in cocoons. In a few days, the pupae will change into a full grown Mansonia Mosquito.
"Scientific name for Masquito is Culicidae".

Search the Web for More information on Mansonia Mosquito at LookSeek.com Search