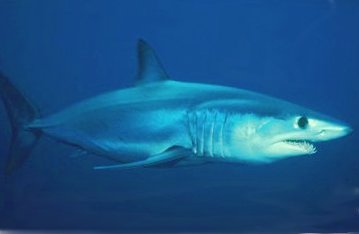 The Mako Shark breed appears with a cylindrical-shaped body, with an upright-extended tail that helps its highly hydrodynamic way of life. The color of the Mako Shark is brilliant metallic white ventrally and blue dorsally. However, the body color if the Mako Shark breed varies as the shark grows and the increase in size. The line of separation between white and blue on the body is different. The base of the nose and the region around the mouth are white.

Mako Sharks are ovoviviparous, and after the gestation period of 15 to 18 months, the female Mako Sharks give birth to young ones alive with 4 to 18 pups in a litter. The young ones appear with a body length of 27 1/2 inches (70 cm).

The average lifespan of the male Mako Shark is 29 years, whereas the female ones live up to 32 years.

There are over 400 types of sharks, Sharks have the most powerful jaws on on earth. Mako Sharks jaws, both the upper and lower jaws move. Mako Sharks skin is made of denticles instead of scales like other fish. The denticles are constructed like hard, sharp teeth (tooth-like projection) and this helps to protect the Mako Shark from being injury. The Mako Shark is carnivores, meaning: an animal that feeds on flesh (Meat). "Scientific name for Shark Selachimorpha"
"Fear of Sharks Selachophobia".

Search the Web for More information on Mako Shark at LookSeek.com Search