Back To Category Earth Science
Title : 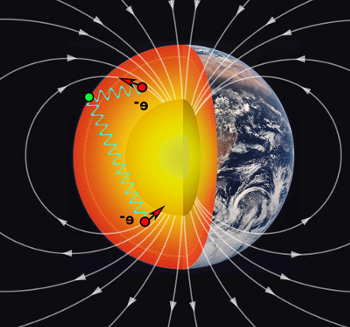 Planet earth has a magnetic field that extends from the earths inner core to where it meats the solar winds.
The solar wind is released from the upper atmosphere. It is a charged particles, also known as plasma, which varies in speed, density and temperature over time and longitude. The charged particles or plasma have energies usually consisting between 1.5-10 KeV.. The magnetic fields ranges from 25-65 tesla units in magnitude. The only time the solar wind is observable on the earth is when it is strong enough to produce phenomena such as the aurora. Auroras heat the ionosphere, causing its plasma to expand into the magnetosphere, increasing the size of the plasma geosphere, and causing escape of atmospheric matter into the solar wind. The overall shape of the earths magnetosphere has the solar wind to thank, fluctuations in its speed, density, and entrained magnetic field strangle effects space local environment.
The magnetic field of earth largely deflects most of the charged particles emanating from the sun. If these particles are are not protected then they would strip away at the ozone layer, which is how we are protected from harmful ultraviolet rays.
Above the ionosphere is the magnetosphere, this extends several tens of thousands of kilometers into space. This region protects the earth from cosmic rays. If it wasn't for the magnetosphere the upper atmosphere of earth would be striped away along with the ozone layer which protects the earth from the ultraviolet rays. Some of the charged particles from the solar wind are trapped in the Van Allen radiation belt. A smaller number of particles from the solar wind manage to travel, as though on an electromagnetic energy transmission line, to the Earth's upper atmosphere and ionosphere in the auroral zones
The magnetic field is generated by the motion of molten iron alloys in the earths outer core which leads it to change over time. The scientific term (nomenclature) for the earth's outer core is geodynamo. Geodynamo comes form a theory in geophysics called dynamo theory which proposes a mechanism by which a celestial body like earth or a star generates a magnetic field. Dynamo theory describes the process through which a rotating, convecting, and electrically conducting fluid can maintain a magnetic field over astronomical time scales. Induction or creation of magnetic field is described by the induction equation:

Search the Web for More information on Magnetic Field of Earth at LookSeek.com Search