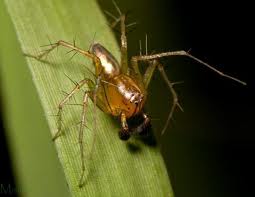 Facts about Lynx Spiders, The members of the family Oxyopidea are commonly known as the Lynx Spiders. These species are considered to exhibit social behavior unlike any other spiders of the nature. The Lynx Spider are generally into pollinating from flowers and they do not prefer spending time at their webs building them rather they prefer hunting other spiders that crawls through the plants and leaves. The Lynx Spider vary in sizes and are mostly from tiny to medium size. They are absolutely green in color which makes them very hunting prone because it helps them hide beneath the grass and the leaves and makes them stay unnoticed.

The muscles in a Lynx Spiders legs pull them inward, but the spider can't extend its legs outward. It will pump a watery liquid into its legs that pushes them out. A Lynx Spider’s legs and body are covered with lots of hair and these hairs are water-repellent, which trap a thin layer of air around the body so the Lynx Spiders body doesn't get wet. It allows them to float, this is how some spiders can survive under water for hours. A Lynx Spider feels its prey with chemo sensitive hairs on its legs and than feels if the prey is edible. The leg hair picks up smells and vibrations from the air. There are at minimum, two small claws that are at the end of the legs. Each Lynx Spiders leg has six joints, giving the spider 48 leg joints. The Lynx Spider’s body has oil on it, so the spider doesn't stick to it’s own web.

Lynx spiders vary in length but the female spiders are about 18 to 20 mm in length and the male spiders are about 10 to 12 mm which makes the female spiders longer and stronger compared to the male spiders. The Lynx Spider have red patches throughout the backside of them and also towards the corner of their eyes otherwise these spiders are absolutely green in color which happens to be a very favorable option for them. Their legs are pale green colored and have black dots all over them. The habitat and lifestyle of the Lynx Spiders have been a topic of research and study for a long time now and still continues to be so.

Lynx Spiders have oversize brains.
In the Lynx Spider the oxygen is bound to "hemocyanin" a copper-based protein that turns their blood blue, a molecule that contains copper rather than iron. Iron-based hemoglobin in red blood cells turns the blood red

A Lynx Spiders stomach can only take liquids, so a spider needs to liquefy their food before they eat. They bite on their prey and empty its stomach liquids into the pray which turns it into a soup for them to drink.

A male Lynx Spider has two appendages called "pedipalps" a sensory organ, instead of a penis, which is filled with sperm and insert by the male into the female Lynx Spider’s reproductive opening.

Spiders do not have a skeletons. They have a hard outer shell called an exoskeleton-(a rigid external covering for the body in some invertebrate animals). The exoskeleton is hard, so it can’t grow with the spider. The young Lynx Spiders need to shed their exoskeleton. The Lynx Spider has to climb out of the old shell through the cephalothorax. Once out, they must spread themselves out before the new exoskeleton will harden. Know they have some room to grow. They stop growing once they fill this shell. Female Lynx Spiders are usually bigger than males.
Female spiders lay eggs on a bed of silk, which she creates right after mating. Once the female Lynx Spider lays her eggs, she will than cover them with more silk.

Search the Web for More information on Lynx Spider at LookSeek.com Search