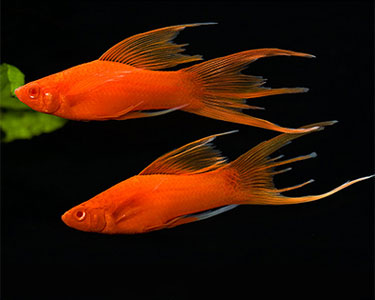 Long-fin swordtails are very popular since they are easy to maintain and they are also beautiful and attractive to watch. The male long-fin swordtail fish is usually elongated and has a long caudal fin shaped like a sword. On the other hand. their female counterparts are mostly robust and lacks the sword.

Mature long-fin swordtail males have the reproduction structure in the anal fin known as Godopodium. The gonopodiums store the sperms in packs known as spermatophores. Once the sperms enter the female body, they fertilizes the eggs and the rest are stored in the oviduct walls for later use. They usually give birth to advanced young ones, who learn how to swim right after birth. This is an advantage since they are able to avoid enemies. They females give birth once after 28 days. An interesting thing about the long-fin swordtail fish is that they have the ability to hide their sexes. When young the male may hides it sexuality mostly because of the other males who are very aggressive towards other males until they are large to become a dominant male. This is a very common thing among long-fin swordtails.

Long-fin swordtial fish are easy to maintain since you can put them in all types of aquariums but avoid acidic water. Among the type of food they eat are flakes, frozen, freeze dried and live food such as brine shrimp.

Long-fin swordtail fish mostly do well if they are kept in large numbers of their kind only but if you have to mix them with other fish types, avoid larger types to prevent them from been eaten. It is also advised to keep the young swordtails in a separate aquarium from the adults since the adult fish eat them.