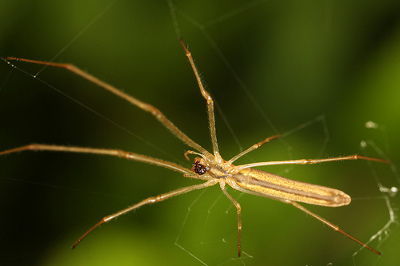 Long-jawed spider lives in Meadows, Mashes, woodland edges and in green shrubs especially near water courses, like in the edges of swamps or over ponds and streams. The Long-jawed spider are mostly found in water as they can walk on water only by using two pairs of Legs together and they can even walk faster on water than on dry land with a speed of 4 to 6 inches per second (10 to 15 cm per second) and that the reason why they don't fear water contact.

Long Jawed Spider are unique when its come to building their Web, this is because comparing to other types of spiders they build their web at night and it's a small circular web and the web doesn't have straight lines as compared to other spider web. Their Web is always Parallel to the ground and both Male and Female build the web, but for Male when it reach sexual maturity it moves hunting and squatting other Long-jawed spider webs like those build by Female spiders.

Long-jawed spiders have oversize brains.
In the Long-jawed spider the oxygen is bound to "hemocyanin" a copper-based protein that turns their blood blue, a molecule that contains copper rather than iron. Iron-based hemoglobin in red blood cells turns the blood red

Their Life Cycle.
Long-jawed spider cycle is interesting, this is because the female adult mates and Lays eggs. The eggs are not taken any special care hence they are laid in several sac and at different times, the Young Long Jaw Spider hatches from eggs and with time, become tiny adults The Long Jaw Spider lives for less than one year. The most interesting thing is that the Female Long jawed spider has a special cavity that it use to keep the male semen to use them for many times.

A Long-jawed spiders stomach can only take liquids, so a Long-jawed spider needs to liquefy their food before they eat. They bite on their prey and empty its stomach liquids into the pray which turns it into a soup for them to drink.

Search the Web for More information on Long Jawed Spider at LookSeek.com Search