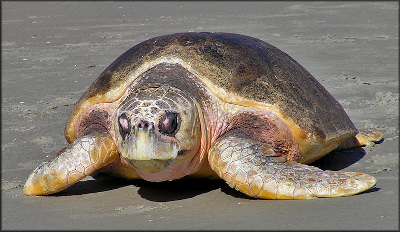 Loggerhead (Caretta caretta)
The loggerhead sea turtle is a yellow and reddish brown and is named for its extremely large head. The Loggerheads are the most common sea turtle seen along the U.S. coastline. Loggerheads are the only sea turtle listed as threated rather than endangered. They hardly ever roam far from mainland shores. They are also found in the western Atlantic and range from Newfouldand all the way down to the tip of South America. Loggerheads are known to feast on the abundant amounts of horseshoe crabs at the mouth of the Chesapeake Bay.
In late June, Loggerhead turtles will migrate to the waters of New Jersey and New York, due to the increase of water temperatures. Juveniles will venture into the Long Island Sound and the Long Island’s eastern bays. When the water cools in late fall the turtles will then return to the south.
The diet of the Loggerhead consists of horseshoe crabs, green crabs, blue crabs, and lady crabs. Use of their powerful jaw muscles help to crush heavy shelled clams, crabs, conches, mollusks, jellyfish, sea urchins, sponges, whelks, shrimp and squid.
The adult carapace length reaches 33 to 40 inches and can weight from 200 to 350 pounds.
Their habitat is costal bays, estuaries, lagoons and open oceans. They stay along mainland shores and feed in estuaries and relatively shallow waters.
Loggerheads are threatened by longline fisheries and population is probably declining alone the southeast coast of the U.S. due to same.

Search the Web for More information on Loggerhead (Caretta caretta) at LookSeek.com Search