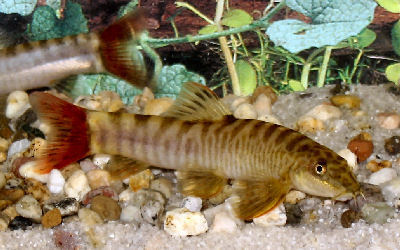 Loach fish is an aquarium species which originates from East Asia and have been successfully introduced in other parts of the continent including Europe and North America. The loach fish comes from the family Cobitidae. The name of the fish comes from the fact that the fish can be able to detect changes in barometric pressure and react with a standing on end or a frantic swim. The fish species do not grow into large sizes with a matured Loach reaching twelve inches long. However, there are some other species like the Botia which grows to maximum lengths of about twelve inches and above and the large Royal Clown Loach which can reach up to twenty inches long.


The Loach fish has a varied, elongated, slender body and rarely flattened with a cylindrical shape and an eel-like or worm-like appearance. The fish can be heavy and chunky with various colors including olive green, yellow, grey and light brown with a pale underside color. Three sets of barbells surround the mouth of the fish and are used by the fish to silt through pebbles or silt to fetch for food or sometimes for digging under the sand and gravel to conceal itself as a defense mechanism. However, other loach fish uses the spines beneath the eyes for the same purpose.


The Loach is an nocturnal, omnivorous, bottom-dwelling scavenger which becomes active after dark or in the evening. They are easy to breed and care for due to their heightened sense of taste, smell and flexible body shapes which allows them to be able to search out stray food wherever it falls in the aquarium. The fish feed on variety of foods including live worms, insect larvae, crustaceans, algae and other vegetable-based foods. You can feed the fish on freeze-dried frozen bloodworms and tubifex, algae wafers and dry flake food.


It is important to note that the fish prefer hiding places like small rocks, caves, plants roots to retreat to at will. They are highly appreciated by most aquarists due to their ability to keep the bottoms of aquariums clean and their ability to live for over ten years.

Search the Web for More information on Loach at LookSeek.com Search