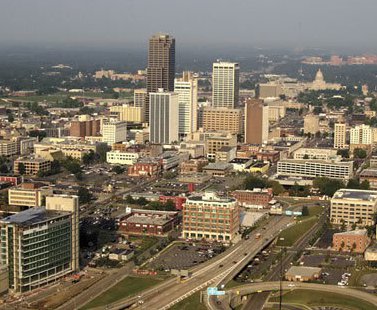 Little Rock Arkansas is located on the Arkansas River, and it still has a River Market District with bars, shopping and attractions. The town is named after the La Petite Roche, the little rock outcropping above the south bank of the Arkansas River which was discovered by Benard de le Harpe in 1722. The river flows along the edge fo the foothills of the Ouachita Mountains.

Little Rock, Arkansas is at a literal crossroads, since the little rock marked a heavily used river crossing. Little Rock, Arkansas is on the Trail of Tears and Butterfield Overland Trail. Today it is at the junction of Interstate 30 and Interstate 40. Highway 67 and Highway 270 pass through it. It is also home to the Arkansas River Trail, one of the longest pedestrian bridges in the United States.

It was the site of the Little Rock Campaign during the Civil War.

Little Rock is home of a national airport and river port designated a Foreign Trade Zone. It hosts Heifer International, a non-profit that gives those in the developing world livestock to raise for meat, milk and eggs for sale and consumption. It is also home of the Nature Conservancy and a state chapter of the Audubon society.

Little Rock is home to the headquarters of a number of large companies such as Bank of the Ozarks, Dillard’s Department Stores, Acxiom, the notorious Rose Law Firm for which Hillary Clinton worked and Nuvell Financial Services. There are several hospitals in the city. The University of Arkansas healthcare network and children’s hospital is one of the largest employers in the state. Little Rock is home to one of the Federal Reserve Bank branches.

Little Rock is deep in the South, located in the subtropical zone. It rarely snows there. However, despite the hospitable climate, Little Rock has little employment based on agriculture, though it has an active urban farming movement.

Little Rock was the home of the integration battles of the 1950s, when the Little Rock Nine, nine black students, joined a previously all-white school. The President at the time sent the National Guard in to ensure that the school was desegregated. The governor of the time, Orval Faubus, initially prevented them from entering.
President Bill Clinton built the Clinton Presidential Center and Park in Little Rock, Arkansas. This presidential library was designed by James Polshek and overlooks the Arkansas River. It sits within a 28 acre park open to the public.

Search the Web for More information on Little Rock Arkansas at LookSeek.com Search