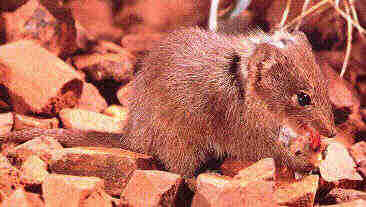 Little Red Kaluta was first described by W.D.L. Ride back in 1964 and he placed its genus in Antenchinus. Later in 1982, Mike Archer assigned the red kaluta to its own genius. Since then it is known to be closely related to the Dibbler.

Little Red Kaluta lives in dry areas of Western Australia. It is mostly found in Pilbara and little sandy Desert mainly occupying the spinifex grasslands. One of the amazing facts to note is that the red kaluta does not lose much liquid evaporation when the weather gets tough in the dessert. This is because it has a lower basal metabolic rate.

Little Red Kaluta has a very coarse fur and is rofours brown in color. It weighs around (20 to 40 grams) and its length is (9 to 11 cm). One can mistake it with the antechunuses because it has a body shape similar to them. But in a closer look you will realize that kaluta has a short head, ears and it is smaller than the antechunuses.

When held in captive little red kaluta can live up to three years. It feeds on insects and small vertebrates. It has a habit of flicking the tail when in air to investigate its habitat.

The mating season is around September and the males don’t live past breeding season. The Little Red Kaluta are believed to die soon after that due to stress. The female ones carry the pregnancy for around seven weeks and give birth later.

The young Little Red Kaluta are weaned when they are four months old.

Search the Web for More information on Little Red Kaluta at LookSeek.com Search