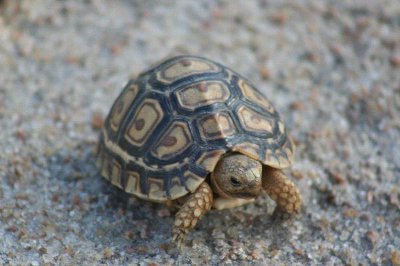 Leopard tortoises grow up to 18 inches (46 cm) in adulthood though there are larger examples that grow up to 28 inches (71 cm). They weigh around 39 pounds (18 kg) and again, there are larger ones that weigh 119 pounds (54 kg). Their shell’s length is around 24 inches (61 cm) in diameter. The larger specimens are believed to be from Ethiopia and Sudan.

The Leopard tortoise shell is high and domed, and it may have pyramid shaped scutes. The juveniles and young adults skin is marked with very attractive markings which are normally cream to yellow and the shell is marked with black blotches, stripes, spots or dashes. As the Leopard tortoises grow, the markings fade to a slaty brown or grey which looks like local dust.

The Leopard tortoise are herbivorous which means their main diet consists of plants. But due to their grasslands habitats, they also eat mixed grasses. In fact the Leopard tortoise are known for their grazing nature. Succulents and thistles are also their favorite. Those in captive rely on fruits and pricky pear cactus though these pears are not common in Africa.

Just like other tortoises their mouth is a beak. The Leopard tortoise hind legs looks like a trunk whereas the front ones are paddle shaped with pigeon like toes with a row of small nails. The Leopard tortoise are able to move very fast especially on rocky terrains and climb mountains. They can also go underwater for as long as ten minutes.

Surprisingly even the young Leopard tortoises can climb because their toenails have a secure grip on rough surfaces, concrete and wood. They can climb up to 12 inch high (30 cm).

Leopard tortoises have different sexual maturity. The ones in the wild reach maturity at the ages of 12 and 15 years whereas the ones held in captive mature very first mostly at the age of six years.

Their courtship is just like that of other tortoises. The male Leopard tortoise court by ramming the females and they make very loud noises.

The females lay a clutch consisting of 5 to 18 eggs just after the mating is over. When eggs are left on the ground, they are likely to hatch. Breeding in captivity is a bit troublesome especially for the South African Species. It is believed that the eggs rarely or don’t hatch at all in an incubator. Leopard tortoises can live up to 100 years in the wild or in captivity.

Humans are Leopard Tortoises main enemy because they hunt them for their meat. Keeping them in captivity can be challenging too especially if they are taken straight from the wilderness. This is because they are normally stressed and hydrated so getting them to eat becomes almost impossible.

Search the Web for More information on Leopard Toroise at LookSeek.com Search