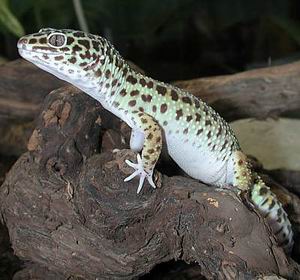 Facts about Leopard Geckos. "Scientific name for Leopard Gecko is Eublepharis macularius". It is a crepuscular gecko that dwells on the ground and the Leopard Gecko is naturally found in the desert of Asia and spreads out through Pakistan, and to the northwestern parts of India. Leopard geckos unlike many other species of geckos, posses eyelids that are movable. It is one of the most popular and well-established pet in captivity.

There are a variety of leopard geckos in relation to skin coloration. Those particularly found in their wild habitats have a bit darker, dull drab coloration than their counterparts in captivity. The leopard geckos in captivity have assortments of the skin color and patterns. The Leopard Gecko has quite a durable skin that provides it with protection from the sand-rocky terrain of the dessert. Leopard Geckos dorsal side is covered with tiny bumps that make it have a rough appearance and texture, while its ventral side is thin, smooth and transparent.

Like every other reptiles, the leopard gecko sheds its skin. Just a few days before it sheds the skin, its color will turn to translucent whitish gray. The adult leopard geckos will shed their skin averagely once per month, while the juveniles can even shed twice. After shedding it reveals a brighter one.

A healthy leopard gecko has a fleshy tail, a thin one is an indication that the reptile is not healthy and might be lacking nutrition.

The leopard geckos will eat its old skin after shedding. There are two theories related to this behavior. First, it is thought that the Leopard Gecko eats its shed skin to conceal its existence in that place, in other terms it destroy its evidence. Another speculation is that it eats its shed skin as a means of supplement the body with proteins.

The Leopard Gecko is endothermic, it absorbs warmth and energy during the day while sleeping, so that at night they hunt and digest food.

The leopard geckos have short legs, which enables them to be agile and quick in reaction and their small nails aide them in climbing the rocks and twigs. The Leopard Gecko have tiny openings on either side of the head as ears and are covered with tympanic membrane for protection. It uses its ears to locate its prey.

Unlike many other species of geckos, the leopard geckos do not have adhesive lamellae on their toes and thus cannot climb on smooth vertical surfaces.

The Leopard Gecko also burrow themselves underground during the daytime, not only as a cooling mechanism, but also to avoid the predators.

Search the Web for More information on Leopard Gecko at LookSeek.com Search