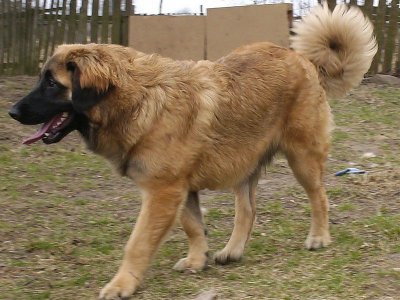 Facts about Leonberger Dogs, "Scientific name for Leonberger Dog, or domestic canine, is Canis lupus familiaris". The Leonberger Dog hails from the city of Leonberg, Germany. The Leonberger Dog was bred in order to mimic the lionā€™s disposition in the town of crest. He is a an excellent family companion as he is calm, sweet and gentle. Despite his intimidating looks, he is a quiet breed who is gracious in his motions. Actually, this jumbo-sized breed is a mix of Longhaired Saint Bernard Dog, Great Pryness Dog and Newfie Dog who needs space, attention and exercise.Leonberger Dogs sweat glands are between their paw pads.
It is a Fact a Leonberger Dog sees in color and have better low light vision. Leonberger Dogs have three eyelids, a lower lid, an upper eyelid lid and a third lid, that is called a haw or nictitating membrane, this keeps the Leonberger Dogs eye protected and moist. Leonberger Dogs eyes have a special membrane for seeing better at night, called a tapetum lucidum - a dogs reflective layer in the choroid chiefly of nocturnal, causing the eyes to glow when light at night hits the eyes and they consist of some layers of smooth flat cells covered by a section of double deformed crystals.

Leonberger Dog is a lively dog with brave, steady and intelligent, sweet dog. He can stay with everyone in the family because he is a loving, stable and loyal dog. He has an even-temperament making him a trustworthy dog with incredible patience. You can trust the Leonberger Dog with children and other home pets. They donā€™t respond well to straining training methods and any form of harsh training can lead to serious behavioral changes. The Leonberger Dog needs to be socialized and trained while he is still young. He is quite an active dog who coordinates well with the humans.

A Leonberger Dogā€™s mouth can apply approximately 150 to 200 pounds of pressure per square inch and an American Pit Bull Terrier, German Shepherd Dog and a rottweiler can have 320 LBS of pressure on avg.

Average body temperature for a Leonberger Dog is between 101 to 102.5 degrees

The Leonberger dog has a double coat, which is long and water-resistant coming in yellow, golden red, red-brown, cream sand, pale yellow and any combination of the above colors often covered by a black mask. The outer coat may have medium, shorter to long black tips. Sometimes, the Leonberger Dog may have some white hairs on the toes and white patch on the chest. The mane takes around four years to develop while both legs are feathered.

The number one heath problems amongst Leonberger Dogs is obesity, so always make sure your dog doesn't get to fat. Many foot problems that Leonberger Dogs have are just an issue of long toenails. The Leonberger Dog suffer from hip dysplasia and hereditary heart problems. They can suffer other mild diseases. They shades fur heavily thus he needs weekly brushing. They need frequent exercises. The life span the Leonberger Dog is from 9 to 11 years.

Female dogs are in heat for matting for about 20 days twice a year. Female Leonberger Dogs are pregnant for 60 days before theyā€™re puppies are born.
A Leonberger Dog is an omnivore, (definition-they eat both other animals and plants). All Dogs are direct descendants of wolves.

Search the Web for More information on Leonberger Dog at LookSeek.com Search