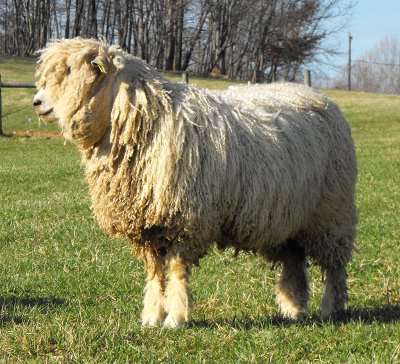 The Leicester Longwool Sheep breed was developed from old Leicester sheep by Robert Bakewell back in 1700. In fact it is also known as Leicester Bakewell. He utilized modern animal breeding techniques to make a slow growing Leicester into an animal that can grow very first and does not have much waste after it is slaughtered.

It has a fleece which is heavy, soft, lustrous and curly. The fleece weighs 11 to 15 pounds (5 to 6.8 kg) and there are some that weigh 20 pounds (9 kg). The fibre diameter of this Leicester Longwool Sheep is 32 to 38 micrometers.

Leicester Longwool Sheep is very hardy and can cope with very cold conditions. However, it does not tolerate very wet conditions for long. The breed can be bucket trained and it will never jump fences.

Leicester longwool sheep can be used in cross breeding. The rams can be used in commercial ewes to sire very heavy weight lambs for selling. Leicester Longwool Sheep can also be used on hill breeds to produce a half bred ewe though it is not very much favored for this job.

A Leicester Longwool Sheep on its back is not a good thing, you need to help, sheep can’t get up from that position, being on its back can be a hazard to its health.
Milk from Sheep is mostly used to make gourmet cheese. A Leicester Longwool Sheep has an average body temperature of about 102.5˚F (39.1˚ Cel). Fat extracted from a sheep, is known as tallow, this is used to make candles and soap. Wool exporting began around 1700 by America. When President Woodrow Wilson was in the White House you would see sheep grazing on the lawn. Wool sheep are usually shorn (a past participle of shearing "to cut") once a year. A lambs is usually sold on average for meat between 90 to 120 pounds (41 to 54.4 kg). "Mutton" is the name of the meat from a full grown Leicester Longwool Sheep. There is a split in the sheep upper lip which allows them to select their favorite leaves off a plant.

Search the Web for More information on Leicester Longwool Sheep at LookSeek.com Search