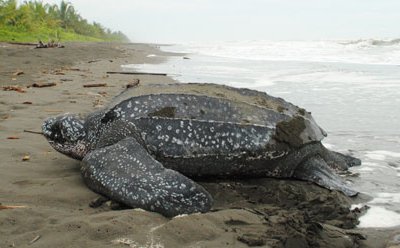 The Leatherback is the behemoth of sea turtles, average nearly 800 pounds and can have a carapace of over 5 feet long. The Leatherback is not only the largest sea turtle it also travels the fatherest and dives deepest of all turtles. The Leatherback sea turtle can dive up to 3,300 feet deep. The Leatherback can also survive colder habitats than any other turtle. Unlike other hard shell turtles the Leatherback’s large elongated shell is made of a thick layer of oily, cartilage reinforced with thousands of tiny bones. The seven narrow ridges that extend the length of the carapace are believed to function like a boat’s keel and help the Leatherback glide through the water.
The carapace length reaches 64 inches in adult turtles. Leatherbacks found in the Atlantic are bigger than those in the Easter Pacific. The largest Leatherback ever found measured nearly 10 feet long. The average weight of an adult is 800 pounds.
Leatherback are common in Northeastern waters of North America. Both adult and large juveniles can be found feeding in the near0shore ocean waters. They appear to inhabit deep oceanic waters for most of their life, where they feed on primarily on jellyfish. Leatherback can mistake plastic bags for jellyfish and choke on them.
Leatherback has the most widely distributed sea turtle and are found all over the world. They can be found as far north as Nova Scotia and as for south as China.
The Leatherback population is declining worldwide, especially in the Pacific. The biggest threats to Leatherback is clear plastic debris and plastic bags. They are also susceptible to fishing nets and longline trawl as well as egg poaching.


Search the Web for More information on Leatherback (Dermochelys coriacea) at LookSeek.com Search