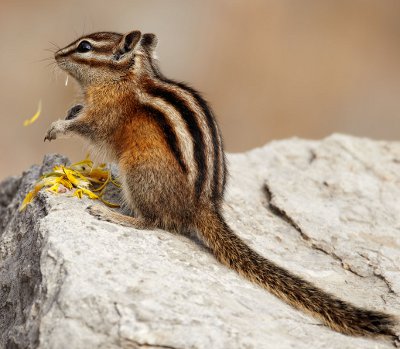 The Least chipmunks are among the smallest compared to all other chipmunks. In terms of body length, they measure between 7 to 9 (185 to 222 mm). When they are mature, the Least Chipmunks weigh between 1 1/2 to 2 ounces (42 and 53 grams). There is sexual dimorphism in that the females are larger compared to the males. On their heads, the Least chipmunks have 2 light stripes and 3 dark ones. On their sides, they have 4 light stripes. The stripe which is at the middle runs all the way to the end of the tail. The fur on the dorsal background is orange-brown and the ventral portion is grayish white in color. The tail of the Least chipmunk is longer and bushy measuring between 2 1/2 to 3 1/2 ounces (82 and 98 mm). Because of their hibernation behavior, Least chipmunks lead a Poikilothermic (of animals except birds and mammals; having body temperature that varies with the environment) lifestyle. When the Least Chipmunks are in a torpid ( having lost motion) state, their body temperatures are lower compared to the times when they are active.

Habitat of Least Chipmunk
The Least chipmunks are found in the temperate forest of the North American continent. Generally, the Least Chipmunks prefer areas that are open such as open medows and forest edges. You can also spot them in river banks and rock cliffs.

The males go straight into mating with the females the moment they are out of hibernation. They do have mate competition which signals a polygamous breeding style. The young Least Chipmunks reproduced become sexually mature after reaching 10 months of age. The mating season begins in April and pregnant Least chipmunks, go through a gestation period which last up to 30 days. When they produce their litter it varies between 2 and 6 babys.

The young Least Chipmunks are usually pink in color and measure approximately 1/2 ounce (15 mm) in length and have an average weight of .8 ounces (2.25 grams). Their eyes open when they are about 28 years following birth and by 40 days, their fur is usually grown. Just like most mammals, the Least chipmunks also lactates for 60 days and the young ones remain for about 6 weeks with the mother.

The Least chipmunks do not take enough care for the young ones. The females choose nests when they are pregnant. The nests are normally suited under logs, stumps, rock piles or rock piles. The positioning of the nursery is such that runoff water and rainfall does not enter.

The Least chipmunks are great climbers, a strategy they use to warm themselves when the weather is cold. They are very active between the month of April and October. The nests that the Least Chipmunks build are seasonal and whenever another round of breeding comes, they build new nests. During winter, Least chipmunks usually retire to burrows where they survive on stored food until the spring season. These animals are territorial and are very aggressive when defending their nests from invaders.

Search the Web for More information on Least Chipmunk at LookSeek.com Search