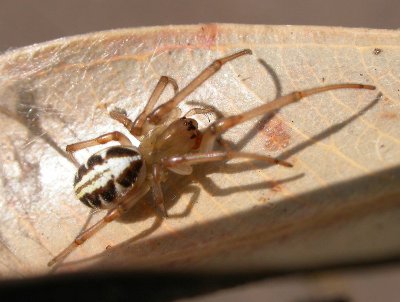 Facts about Leaf-curling Spiders, "Scientific name for Leaf-curling Spider is Phonognatha graeffei". The leaf curling spider is a spider that is commonly found in the southern parts of the Australian forests and woodland, the main reason why it is called the leaf curling spider is that it uses the leaves in the middle of the web to protect itself from predators such as birds. The Leaf-curling Spider has red-brown cephalothorax and the legs, more so the abdomen has a creamy yellow pattern on the upper side which is irregular; the spider has long legs with oval shaped abdomen.

More so the bites from the leaf curling spider might not be considered poisonous in that it is very shy and this makes it to be reluctant to biting people, if bitten by the leaf curling spider possible curling will occur and it is considered local pain, the leaf curling spiders also rely on vibrations through the webs that they live on and this is because they have poor eyesight, also they build their webs at night. The Leaf-curling Spider preys on small insects such as the aphids, mosquitoes, lady beetles and ants that are caught in the web, they are then immobilized by the spider and their body fluids are consumed.

Leaf-curling Spiders have oversize brains.
In the Leaf-curling Spider the oxygen is bound to "hemocyanin" a copper-based protein that turns their blood blue, a molecule that contains copper rather than iron. Iron-based hemoglobin in red blood cells turns the blood red

A Leaf-curling Spiders stomach can only take liquids, so a spider needs to liquefy their food before they eat. They bite on their prey and empty its stomach liquids into the pray which turns it into a soup for them to drink.

Search the Web for More information on Leaf-curling Spider at LookSeek.com Search