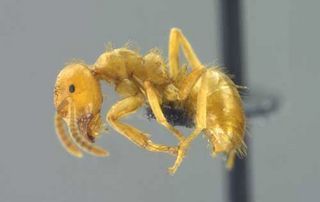 When there is heave rain spells in late June and early July, the Large Yellow Ants will build a temporary mound of excavated soil resembling mole hills (but much more precise in its construction), built up among dirt, clumps of grass or small stem. Tunnels are all through the soil around this temporary nest. The chambers in side this nest underneath the ground have exposed roots, and these have aphids-(a minute bug that feeds by sucking sap from plants and roots. It reproduces rapidly, often producing live young without mating, and may live in large colonies that cause extensive damage to crops).
In some areas where there is a high water table, this may be a permanent home and will have live vegetation growing from it and the aphid under the ground. The aphids excrete a sweet liquid that is called honeydew that the ants will gathered. It seems like the Honeydew provides the Large Yellow Ants with there primary source of nutrients.

The mating occurs between the month of April and August. Large yellow ants are inactive during the day and so the mating only takes place at night. Just like many ants species, the large yellow ants take the nuptial flight. The winged females and males fly out and mate. Soon after mating, the winged Large Yellow Ants male dies because it is unable to feed. The female large yellow ants then move out to establish a new nest where it lays eggs. The eggs hatch to produce new workers, and winged females and males called swarmers. She takes care of the brood until the workers are able to forage and take care of the new colony. The swarmers also fly out of the nest and mate and the cycle continues.
Ants are omnivores like humans, an omnivores, (definition-they eat both other animals and plants).
Ants have two stomachs, one that holds food for them to eat and one for other the colony.

Search the Web for More information on Large Yellow Ant at LookSeek.com Search