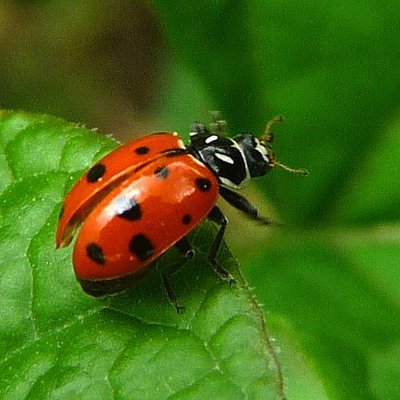 Facts about Ladybugs, "Scientific name for Ladybug is Coccinellidae". Ladybugs are loved by many because of their colorful beautiful spotted bodies. Farmers on the other hand love what the Ladybugs do to insects such as aphids that are known to eat and destroy plants in the farm. This way the lady bug helps the farmer protect their crops for a bumper harvest.

The Ladybug lays hundreds of eggs in colonies of plant eating insects like aphids. The lady bug larvae begin to eat soon after hatching.

The lady bug is also known as lady beetle and ladybird beetle in Europe. There are approximately 5000 different species of ladybugs with different appetites. More than 450 of these species are known to be native to North America. The lady bug is about (0.8 – 18 mm) in size. This is equivalent to 1/32 to 45/64 inches.

While some ladybugs eat plant eaters; there are some ladybugs that are known to eat and destroy crops. Such include: the Mexican bean beetle named after the plant it preys and the squash beetle.

The Ladybug looks like a short sphere in appearance, with tiny spotted, round and sometimes oval shaped domes. They have six legs.

These spots and attractive colors are meant to make the Ladybug unappealing to its predators. In order to protect itself the Ladybug is known to secret a fluid that gives it an awful taste from the joints of its legs. When around predators the lady bug can either secret the awful fluid or simply act like it’s dead.

The Ladybug is known to seek shelter from the cold winter indoors away from the fields and forests. It is not uncommon to find Ladybugs holding onto buildings illumined by the sun during warm temperatures after long periods of cool weather.

While most Ladybugs are brown, yellow and red and spotted; some are actually stripped and others just plain colored.

Ladybugs belong to the Coccinellidae family and there is a myth that says the number of stripes or dots a Ladybug has determines its age. There is however no scientific proof of the same.

Search the Web for More information on Lady Bug at LookSeek.com Search