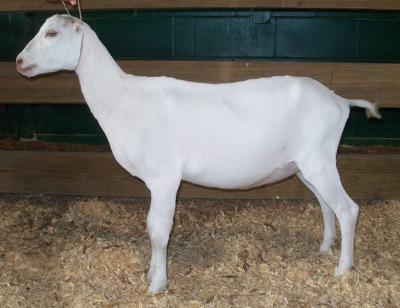 A goat herder notice how much energy his goats had, after eating coffee bushes and that's how coffee was first discovered. There are over 210 breeds of goats in the world. LaMancha Goats have no teeth in their upper front jaw. LaMancha Goats have 24 molars and 8 incisors. Both sexes, female and male goats can have beards. Male LaMancha Goats reach puberty at the age between 4 to 8 months and the female is between 7 to 10 months. Male LaMancha Goats at the beginning of mating season go through a period called a "rut". The "rut" is the beginning of the courting for a doe, a very strong foul musky odor and fighting between bucks begins.

Goats can be born without or with horns "polled". The average life of a goats is between 8 to 12 years. LaMancha Goats have a four chamber stomach, goats are "Ruminant" is any hoofed even-toed mammal, that digests its food in two stages. First by eating the raw materials and regurgitating a semi-digested form known as "cud" (ruminating: chewing the cud.) then eating the cud. The goat is one of the 12 animals in the Chinese zodiac. "Wattles" is that little tufts of hair that dangles from the goats throat. Goats milk is higher in niacin, calcium and vitamin A than cows milk. A LaMancha Goat is a herbivores, that eats leaves, grass, hay and furns {plant eaters}.

Search the Web for More information on LaMancha Goat at LookSeek.com Search