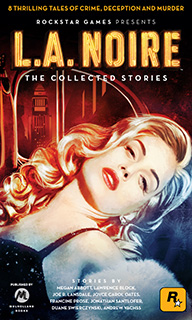 The videogame L.A. Noire takes place in 1947 Los Angeles, a city of glamour, fame, and wealth, but also where crime, vice, and corruption are rife. The player assumes the role of Cole Phelps, a Los Angeles Police Officer who rises through the ranks of the department. He has joined the police force to "right the wrongs" he committed during the WW2 He starts off as a patrol-man, then advances to traffic detective, homicide, vice, and finally arson investigator. Each rank gives the player a partner who will help Phelps in his investigations, fights, and arrests.

I am having a pretty good time playing this game, and it looks absolutely beautiful. Pretty much this is L.A. Confidential�, with a dash of the classic TV show Dragnet. And you feel like you are playing a movie more than you are playing a video game. Rockstar and Team Bondi have done excellent job creating this open world city from the past.

The in-game city has been meticulously recreated to be an accurate representation of Los Angeles in 1947, before the highways bonds swathed through the city

Visually this game is stunning and almost strangely hyper-realistic, while that might be a slight over statement, let me explain. The renderings of the in-game characters are richly detailed and are full of facial expression. And as you play you'll start to recognize the actors that portray the game characters, literally. As I'm playing the game I'm going hey that's the guy from Heroes, and then I recognize that guy, and that one, etc etc. It's not photo-realistic but it's still pretty damn cool if you ask me. The cut-scenes and game play graphics are seamless. The story and dialogue are strong without being to overly convoluted, and the game controls are pretty simple once you get used to them.

You have go around the city running on foot, driving cars after people and also collect clues and questions from different witnesses and suspects. You use the clues and questions to cross-reference witnesses and suspects during interrogations. It is a little confusing at first but you need to watch the expressions of the people your questioning/interrogating to judge whether there is any Truth, or Doubt, or an all out Lie to what they are saying and if you have the evidence to prove any it. So while you think one person is guilty, a piece of info will make you think otherwise. You can even use Intuition points you earn throughout the game to remove an answer, show the clues, or to ask the community (Social Club) if your online. OK everybody got that, no you don't. This is more of a police investigative game, than it is a shoot-em-up action game.

Those of you out there that are expecting Grand Theft Auto or even Red Dead Redemption will be disappointed, because you can't do any random acts of shooting and lawless carnage, because you are the law. You can't just pull out a gun and shoot someone or run anyone over with a car.

Only bad things are that sometimes the investigations can be somewhat repetitive, and the other street crimes are far an few between. Also there is no multi-player game play, while that is not necessarily a bad thing, it would have been cool to have something like that, maybe a co-op mode.

One more thing this is Los Angeles 1947, so it is graphic, violent, racist, religiously intolerant, vulgar and brutal. Think Black Dahlia brutal. It is a very mature and adult game and I'd rather see a kid playing Call of Duty than this one, plus they'd probably be bored with it anyway.

I recommend, if your not a hardcore gamer, renting it first just to test the waters, so to speak, to see if your ready to plunk down $60 for this game. If you are a gamer, you;'ll buy it no matter what, and you'll enjoy it.