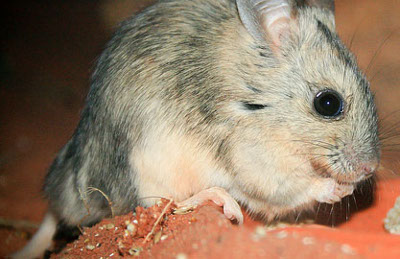 Facts about Kultarr. "Scientific name for Kultarr is Antechinomys laniger". The Kultarr or Jerboa marsupial, wuhl-wuhl or ptichi-pitchi is an Australian desert species, though it will live in scattered woodlands of acacia and mallee woodlands. Kultarr prefer heavier soils filled with sand, stone and clay. Despite the name, the Kultarr is not related to the Jerboa.
The Kultarr like many other Australian marsupials is the only species in its genus, Antechinomys. Its species name is Antechinomys laniger. The species was identified by Gould in 1856.
The Kultarr is three to four inches long, with a tail up to ten inches long. Males are larger than the females. They eat invertebrates like roaches, beetles, crickets and spiders.
The Kultarr is light to dark brown or gray, with a lighter chest and a dark ring around the eye. Breeding females will sprout long reddish brown hairs. This mouse like species has large eyes. Kultarrs have enlarged ears. They have large hind feet with four separate toes.
The Kultarrs going into heat up to six times during the midwinter to midsummer breeding season. Gestation is around two weeks. Females have around half a dozen young at a time. The Kultarr young move on to the pouch where they remain for another four to six weeks. They reach sexual maturity at around a year old. The Kultarr live four to six years in the wild, assuming they are not eaten first.
The Kultarr is not considered threatened. Its range covers almost all of Australia’s Outback. The eastern and western populations were once considered separate species but now recognized as part of the same species. The two sub-speices are Antechinomys laniger laniger and A. l. spenceri. Antechinomys laniger laniger prefers clay pans in Acacia woodlands, while spenceri prefers shrub lands and stony granite soil. They like to burrow into the ground or live in cracks in the ground, but they will use another animal’s burrows if it is available.
Unlike other desert dwelling marsupials, the Kultarr’s numbers have not been seen declining due to cattle grazing. The Kultarr has declined in New South Wales. The greater threat to this species is predation by cats and foxes.

Search the Web for More information on Kultarr at LookSeek.com Search