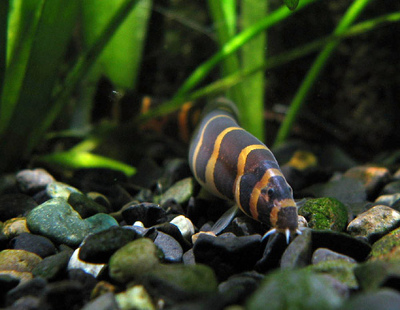 The kuhli loach is a small, slender, snake like nocturnal loach or freshwater fish which belongs to the loach family known as Cobitidae. The loach is native to the Malay Peninsula and Indonesia. The fish can hide and at times usually darts around quickly when startled in a shared or enclosed habitat. The kuhli fresh water fish is known to have a great advantage over many other loaches bred in aquariums because it never grows lager than three to five inches in length upon maturity, the fish reaches two and three quarters with a maximum length of five inches. The fish has a long life expectancy of up to ten years.


The distinction between the male and female Kuhli is not apparent. However, when the fish is actively breeding, a closer look reveals the males to have dorsal cross-sections with larger pictorial fins which tend to be paddle in shape with pigments. However, the females always become larger than the males with observable green colored ovaries which appear before spawning. The fish spawns occasionally and when it occurs, several hundred eggs are laid around the roots of floating plants.


The Kuhli loach is very easy to care for as it requires medium soft to medium waters with a pH of approximately six to seven. However, the fish can tolerate various water conditions with temperature ranges of about twenty four to twenty nine degrees Celsius. The fish can be bred in home aquariums in twenty-gallon tanks. However, it is important to ensure that the tank is covered to prevent the fish from squeezing out.

The fish is a carnivore, preferring frozen and live foods of all types including tubifex and freeze-dried bloodworms. However, the fish can be trained to feed on flake foods.