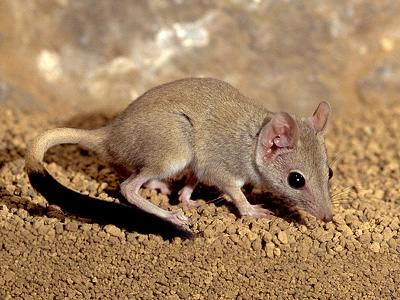 Facts about Kowari. "Scientific name for Kowari is Dasyuroides byrnei". The Kowari is an Australian marsupial and carnivore. The Kowari has the scientific name Dasyuroides byrnei. The species is also called the Kayer rat and kawiri. The Kowari is the only member of the genus Dasyuroides. The species was first identified in 1896.
They live in the dry grasslands and deserts of the Outback. Their range includes the South Australian Desert Lands Natural Resource Management Region. There are two sub-species of Kowari, those in the northeast and those in the southwest. The Kowari may be extinct west of Lake Eyre.
They eat meat, primarily rats, lizards, birds and insects. Their habitat is centered on gibber plains, areas with crushed up bits of rock.
Male Kowari are larger than female ones. Males are about five to six inches long while females are around three to four inches long. The tail is about as long as the rest of the body, giving them a total length of nine to thirteen inches. They weigh two and a half to five ounces.
Kowari communicate with each other by flapping their large tails. They can hold their tails erect, something the similar looking Dasycercus genus cannot. Kowaris have pointed pink snouts as well as pink ears.
Kowari are nocturnal, spending the day in burrows during the day. They give birth to half a dozen young after a one month pregnancy. Smaller individuals breed once around April and May, while larger individuals can give birth twice a year. In captivity, the females were go into heat up to four times in a year.
Kowari become independent of the mother around three to four months of age. They are sexually mature at around eight months of age. The Kowari live three to six years in the wild.
The Kowari’s habitat is threatened by cattle grazing. They aren’t endangered by direct competition with cattle but the changes in the habitat that impact their food supply.

Search the Web for More information on Kowari at LookSeek.com Search