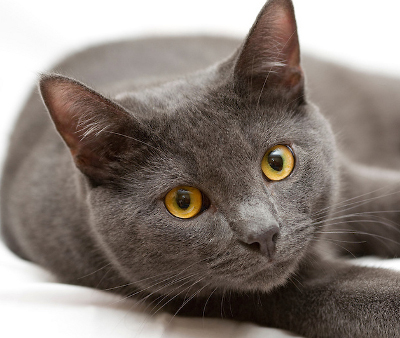 Facts about Korat Cats, "Scientific name for Korat Cat is Felis Catus". The "Korat Cat" originates from Thailand, which is highly regarded as a symbol of prosperity. The Korat Cat has muscular body with fine coat and it is normally quieter and gentle than other cats. This Korat Cat breed matures slowly and it may even take the cat up to 5 years to reach its optimal physical and mental development. The Korat Cat is clearly indicated by the eyes, which normally become luminous green when the Korat Cat is around 3 years old. The Korat Cat devotes itself fully to humans making it one of the loveliest ancient cats. Korat Cat is among the few purebred ancient cats still in existence and the Korat Cat are actually the descendants of the jungle cats of the Malay Peninsula.

The Korat Cat have the color of the Sawat fruit which is light green mingled with some grey tones. Korat Cats fine coat is silver-tipped blue that gives it an impeccable shimmering shine. This color absorbs light giving the coat a halo effect. The roots of the hair are light in color but the up the shaft, the deep blue and the silver colors of Korat Cats dominates especially around the toes and the muzzle.

The Korat Cat has a single coat close-lying coat, which is easy to brush.

The Korat Cat aren’t vocal cats but they have their own ways of expressing their desires. The Korat Cat usually rub around your legs and shoulders when they want something and it also means they are marking out their territory. The Korat Cat is playful and full of life but he isn’t very active as he spends most of his time resting at the sofa or at the bed.

The Korat Cat are good at the fetch game and with their intelligence, the Korat Cat can scheme to have a rest at your arms or your lap. Korat Cat is a friendly cat who can easily get along with other pets and children.

The Korat Cat has a straight valentine-shaped head that showcases four hearts. The nose, the chest and the top of the Korat Cat head are heartily shaped. The Korat Cat are medium weight cats having semi-cobby bodies and a tapering along the waist. The shoulders are wide while the neck is short and heavy.

The Korat Cat breed is a hardcore breed that cannot contract diseases easily. The Korat Cat are generally healthy cats but you should keep them indoors to protect them from cars, thieves and contagious pet diseases. Brush his hair weekly and ensure that his eyes and ears are kept clean always. Korat Cats on average sleep 13 to 14 hours a day and when they are awake, the spend a lot of time liking themselves to keep themselves clean. Korat Cats help control rodents like small rats and mice where the live homes, warehouse, ect. A female Korat Cat is called a "queen or molly", male Korat Cat is called a "tom" and the name "clowder" is called a group and young or baby cats are called kittens. A Domestic cats have an average weight around 8.7 to 11 pounds (3.9 to 5 kg). Cats have very sharp hearing and their sense of smell is fantastic. Korat Cats average life span is around 12 to 15 years. The reason why cats can squeeze through very small spaces is that they have no collarbone and free-floating clavicle bones that their shoulders are attach to their forelimbs, that's why a cat can fit through a hole the same size as its head and they use their whiskers to determan if they can fit through the space.

Korat Cats can see at levels of light six time lower than a human, this is why cats can catch mice so easily at night. Korat Cats outer ear uses 32 muscles to control it, and a human has only 6 muscles in its ear and a cat can move its ears 180 degrees. A cat can move their ears independently.

The cat's hairball is called a "bezoar" (meaning a concretion or calculus found in the intestines or stomach of certain animals, in particular ruminants, formerly alleged to be an effective cure for poison). A Korat Cat can climb up a tree well but can not climb head first down a tree, because all the claws on a cat’s paw points the same direction, to get down from a tree, a cat has to back down. A Korat Cat can run at a top speed of about 30 mph (48.2 km) over a short distance.
A cat rubs against a person to not only to be affectionate but also to mark out its territory. A Cat does not like water because its fur is not insulate it well when it gets wet. A Korat Cat averages about 12 whiskers on both side of its face. A Korat Cats jaw can not move sideways, there for a cat can not chew large pieces of food. A Korat Cats back is highly flexible because of its 53 loosely fitting vertebrae. The body of a Korat Cat has 230 bones. While a human body has 206. Compared to a humans who only have 34. The average cat temperature of a cat is 101.5 °F. The Korat Cats heart beats at 110 to 140 a minute, That is almost twice as fast as a human heart. A Korat Cats has 30 teeth while a kittens has about 26 teeth that they will lose at about 6 months of age. A Korat Cat has the ability to jump up to six times its length. The fear of cats "Ailurophobia".

Search the Web for More information on Korat Cat at LookSeek.com Search