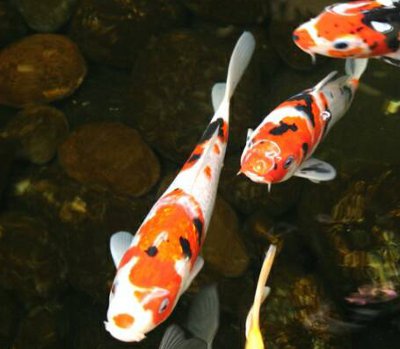 Facts about Koi Fish. Koi fish are originally from Japan. "Scientific name for Koi Fish is Cyprinus carpio". Commonly known in English as (Japanese Carp). The word koi comes from Japanese, simply meaning (carp). Koi fish groups are well-known by coloration, patterning, and scalation. Some of the major colors of the Koi Fish are red, black, white, blue, cream and yellow. The most popular category of koi is the Gosanke, which is made up of the Kohaku, Taisho Sanshoku, and Showa Sanshoku the groups of the different patterns on the fish. They are part of the Japan culture. The one thing to note is, Koi fish usually out live their owners. In fact, Koi fish are often passed down from generation to generation in Japan. They can live up two 200 years and even longer in some cases.
You could keep Koi fish in aquariums but their favorite dwelling is in ponds. They are totally a pond fish and the Koi fish are made to be bred to look good being seen from above in ponds.
It is an important pond fish, that has a big following in the world. Breeding Koi fish is by taking the best looking ones and breeding them, to get the even pure and health and as best looking as they can. The Koi fish that are most prized come from Japan where they were first cross bred many years ago from the common carp.
Koi Fish could be said as one of the most gentle of fish. Maybe because they have been cross bred by breeders so much and have become as a result very humble. A lot of Koi fish owners will feed their Koi Fish by hand and this could have an effect on them being so docile.
The Japanese Carp or Koi fish will not harm any injured fish, if you have any other injured fish place them with the Koi fish for rehabilitation. This assumes the injured fish isn't very much smaller and not a fighter. make sure the other fish are not sick either.
Koi fish can grow to very big in sizes, if in the right environment.
The Koi Fish is more of a vegetarian, with a very little omnivorous ability, Koi Fish will eat live shrimp. The Koi Fish do well with floating pellets specific for the Koi fish.
The Japanese Carp can be prone to disease if not taken care of properly. You need to always check the water quality to prevent disease and infections. Lesions on the body are also a danger with poor water quality.
Get quality medication, without good medications they are as good as dead once they get these ailments.
In Japan they have competition amongst breeders to see who has the best Koi fish, winning this can make your Koi Fish much more valued in the market.
This is one of the select group of pet fish, just like dog breeders in the dog world, in which has reached a stage of being an art as much as a past time, and one that has a celebrated following all over the world.
koi fish reproduce through spawning where female lay many eggs and one or more males will fertilize the eggs. Fry is what they call the baby fish. Koi Fish will produce thousands of offspring from a single spawning. Culled fry are usually disposed of or used as feeder fish (mostly used for feeding arowana because of the belief that it will improve their color), while older culls, within their first year between 4" to 6" (10 to 15 cm) long are also called "Tosai" that are often sold as inferior, pond-quality Koi Fish.
breeders are always trying to developing the best possible type of new varieties of koi fish.

Search the Web for More information on Koi Fish at LookSeek.com Search