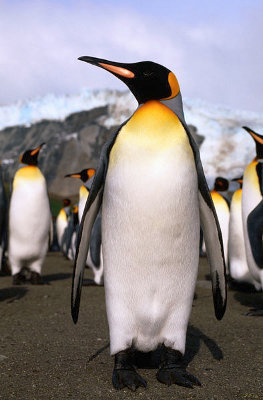 Features of the King Penguin

The young King Penguin are similar to the adults but their faces are dull. Their bellies are white and the back is paler than the other penguins. The King Penguin is more of grayish than black. The cheeks are dark orange, ears have pale yellow patches and the throat is grey-white. King Penguin stands at 33 to 38 inches (85-95cm) tall. Their weights differ because the male King Penguin weighs 36 lbs (16.6kg) whereas the female weighs 32 lbs (14.3kg). The king penguins have a long and slim bills measuring at 4 to 5 inches (12 to 13 cm).

Diet of the King Penguin

King Penguins are carnivorous just like all other penguins. Their main dish is krill, small crustaceans and lantern fish. King Penguins can drink sea water. They make deep dives in water in search for food. The King Penguins can dive more than 900 feet (275 meters) in order to get to food source they really can spending around 20 minutes submerged when diving. This is done during the day but at night the King Penguin make shallow dives. The parent King Penguins will first regurgitate the food and then feed their chicks. King Penguin don't drink water, since they take in seawater as they swallow their meal and like all penguins, they have a that special gland that removes salt from their bodies after swallowing saltwater.

Reproduction of the King Penguin

The breeding takes place at the northern part of sub-Antarctic Islands and around Falkland Islands. An interesting fact to note is that the King Penguin breeding cycle is very different from other penguins and they pair remaining faithful to one another.
Their colonies are dense and they don’t build nests. Their preferred breeding sites are open and they maintain a close distance to each other. The king penguins lay one egg which is around 10.9 ounces (310 grams). The incubation period last 55 days and both parents take turns to incubate and care for the egg until it hatches. The King Penguin chicks are able to survive in very cold weather despite of experiencing prolonged hunger.

subspecies of the King Penguin

Predators of the King Penguins

Apart from big marine animals King Penguins don’t have many predators except Snowy orcas, Sheathbill and leopard seal this explains why they are so many.

"Scientific name for Penguin is Sphenisciformes". King penguins have a lifespan of 15 to 25 years and breed after three years of age.

Search the Web for More information on King Penguin at LookSeek.com Search