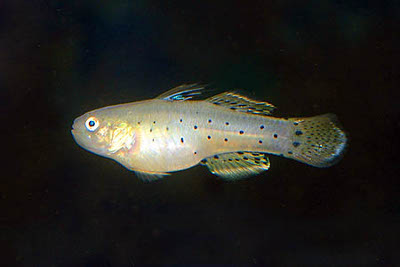 The Knight Goby (Stigmatogobius sadanundio) is found in the fish family of Gobiidae and is a species of the goby native to south Asia. It is a widely distributed fish species and has been recorded in Indonesia, India, Cambodia, Fiji, Pakistan, Bangladesh, Thailand, Sri Lanka, Malaysia and Singapore. It mainly inhabits the estuarine zones, but is also found in fresh waters of estuaries as well as the tidal zones of rivers. They can also inhabit different aquarium levels. The fish has a maximum standard length of 3.6 inches (9cm).

The Knight Goby is a peaceful, fairly active, hardy fish that spends most of its time swimming in the mid-section of the tank. It is good for communities provided that the aquarium is furnished with plenty of crevices (visual barriers) and rocky caves. Otherwise, it may become aggressive and territorial especially when defending their niche against any other fish. Keeping it with the smaller species is not recommended as the older ones have a tendency to catch and even devour the younger ones in the aquarium. The Knight Goby is also known to nip the fins of long-finned and slow-moving species.

The fish prefers a soft, sandy substrate. Providing it with lots of nooks, caves and crannies enables it to lurk and form territories. It mostly feeds on frozen foods, such as bloodworms, mosquito larvae, spirulina-enriched brine shrimp, Mysis shrimp, chopped krill and prawns and frozen daphnia. It is also known to graze on algae.

Knight Goby’s body is a fairly dull pale-grey in color. Its body is speckled with black dots and its eyes bare often a nice, bright shade of blue. Being a goby, the fish has a differing finnage and unique movement to the usual tropical fare. The male species tend to possess larger fins while the females do display a more light yellowish coloration. They prefer a water temperature of between 72 and 81 degrees F (i.e. 20 to 26 C), and a pH level of 7.5 to 8.5.