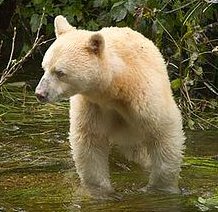 In the wild, the Kermode Bear feeds on all kinds of plants, bulbs, fruits, rodents, insects, salmon and nuts. Due to their plentiful food supply, it is simple for them to build up for the insensitive winters.

Kermode bears usually mate during the summer season. When fall comes, the female Kermode Bear will find an appropriate place, such as a rock shelter, hollow tree trunk, or hillside dugout to build the den. They line up their dens with dried leaves, grass, and twigs for insulation and comfort. At the time of hibernation the Kermode Bear have a quasi sleep like condition to preserve energy during the chilly winter. Functions of their body will slow down and the bear will use the stored fat that has been accumulated all through the year. The female Kermode Bear will give birth to young ones in their den during hibernation, which continues until spring or the early part of the summer season, according to weather conditions. The female Kermode Bear is capable of giving birth to 1 to 3 cubs per litter and each cub will weigh about 1 lb (454 grams).

The average lifespan of the Kermode Bear is 20 years to 25 years in the wild, whereas in the captive, they can live more than 35 years.

Search the Web for More information on Kermode Bear at LookSeek.com Search