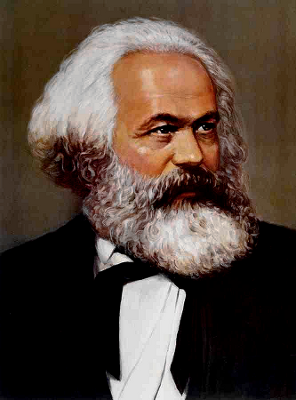 As a philosopher, historian, sociologist, and economist Karl Heinrich Marx is one of the most influential figures is modern history. His worldview consisted mostly of the large working class working together to create the ideal society, and over time this would naturally occur. Even though Marx was known to be an atheist, he still had much faith in his philosophy. He cared more about the large population starving throughout the city then his own family in some cases because he has seen the devastation poverty can create.
Marx noticed a very distinct pattern that occurred since the beginning of time. Marx stated that conflict between opposing interests is the cause for Social change, but in the beginning there was free productive work and over time it was dehumanized and manipulated towards the opportunists in control of the capitalist production. He said this is just due to human nature. Marx realized that each level of advancement created a new class or invention that would eventually lead to its downfall. The downfall of the level is in turn good though because with each level that humanity supersedes, all of humanity would benefit. Therefore every level humanity goes through increases the standard of living but also it is to be doomed to be superseded again because of its own downfall due to internal and class contradictions.

Marx sees Human nature as a good thing because it is a natural instinct that has a cause and reaction. His views of human nature form the basis for why capitalism and socialism are created and why they succeed or fail. Marx says that humans express themselves by showing what they own, and they interpret what's their own by altering existing nature to call it their own. Marx relates this to labor because it defines us. Commodity fetishism is the general consensus of determining what items are valuable based upon one's class. Marx also realized that the working class, or proletariat, is a powerful class because of its size and abilities under strikes, but the class that owns the production, bourgeoisie, is the strongest because of its influence on culture; this influence is called idealism. Commodity fetishism is just the way humans adapt to the commodities produced in a culture. But taking away work, or what one possesses, takes away much more then that alone because a person sees their own life in the work they put into production to influence society. Commodity fetishism is the basis for idealism, which is the idea that those producers, or bourgeoisie, hold a political power as the one who produces commodities, but also the ideas that coincide with the commodities.

Marx says that the ideal society will come about on its own naturally due to human nature. Marx said that feudalism would naturally come about due to the limited amount of land and resources in any civilization. Feudalism must exist before capitalism because the development of higher and lower classes is needed to achieve Capitalism. Capitalism is needed to achieve Socialism because the companies and means of production are necessary. And Socialism is needed before Communism because the class system needs to be advanced closer. Therefore Marx says that due to a Capitalistic society the proletariat should grow in numbers and develop a conscience and powerful class of its own in which they would act, and in time they will realize they must change the system. If the proletariat were to own the means of production, they would only encourage ideas that benefited everyone, this in turn would destroy the exploiting class and create a system that is less prone to fluctuation. In the new system society would be free to act without being bound to the labor market and subject to democratic values. Thus there would be little use of need for state government because in between the Capitalist and the Socialist/Communist state, there will be a dictatorship of the proletariat where the working class will hold the means of production and political power forcibly until a moment of reconcile occurs and the state won't be needed because it is distributed amongst the proletariat class. At this point pure socialism comes about which Marx describes as the ideal society.

Marx did declare himself an atheist and in fact did dislike religion. He learned most about religions from Ludwig Feuerbach; Feuerbach said that God is a psychological projection meant to compensate for the suffering people feel. It leads to the rejection of wholesome validation and optimistic thinking. He felt that Religion was the obstacle that was blocking the proletariat from leading their revolution. He claimed "Die Religion ... ist das Opium des Volkes", which translates to "the religion" is the opium of the people". It would only eliminated when capitalism finally fell and it would create true human emancipation.

"The foundation of irreligious criticism is: Man makes religion, religion does not make man. Religion is, indeed, the self-consciousness and self-esteem of man who has either not yet won through to himself, or has already lost himself again. But man is no abstract being squatting outside the world. Man is the world of man state, society. This state and this society produce religion, which is an inverted consciousness of the world, because they are an inverted world. Religion is the general theory of this world, its encyclopedic compendium, its logic in popular form, its spiritual point honneur, its enthusiasm, its moral sanction, its solemn complement, and its universal basis of consolation and justification. It is the fantastic realization of the human essence since the human essence has not acquired any true reality. The struggle against religion is, therefore, indirectly the struggle against that world whose spiritual aroma is religion.
Religious suffering is, at one and the same time, the expression of real suffering and a protest against real suffering. Religion is the sigh of the oppressed creature, the heart of a heartless world, and the soul of soulless conditions. It is the opium of the people.
The abolition of religion as the illusory happiness of the people is the demand for their real happiness. To call on them to give up their illusions about their condition is to call on them to give up a condition that requires illusions. The criticism of religion is, therefore, in embryo, the criticism of that vale of tears of which religion is the halo.

What matters most to Marx is the proletariat. His entire life was dedicated to helping them. In his early years he saw the repression that some people faced like when he entered Trier high school where many liberal humanists were beginning to be accepted until the Government found out and raided the school in 1832; they said they discovered the teachers were distributing labeled seditious literature espousing political liberalism. Or when he traveled to London for the first time while living in Brussels; this was during the largest part of the industrial revolution and London was the big booming center of it so it experienced some of the harshest circumstances. To show Marx's dedication to the proletariat, when Marx moved to London Marx and his family lived in poverty for the first couple of years because he wasn't working, only researching capitalism and trying to figure out the problem; he mostly depended on Engels as a source of income.

Marx also felt the repressive force of a state turning communist after he graduated and began to writing for Rheinische Zeitung, which was a socialist newspaper. The newspaper usually criticized the different governments of Europe and their policies. The newspaper was a very rebellious one so the government censors kept a close eye on the paper and eventually banned it because of an article they wrote on the ally Czar of Russia who asked it be banned. Marx said once about the paper â€œOur newspaper has to be presented to the police to be sniffed at, and if the police nose smells anything un-Christian or un-Prussian, the newspaper is not allowed to appear.â€ He and his wife moved to Paris in 1843 where he got a job to write for Deutsch-Franzosiche Jahrbucher, which only got to publish one issue, but was very successful. It was very similar to the first newspaper he wrote for; it analyzed different government situations in Europe so police once again in addition to two more different newspapers confiscated it after that.

Marx's main concern was the effects that Capitalism had on the proletariat. Marx had very mixed views on Capitalism. On one side of the scale, Capitalism is one of the most revolutionary strategies that exists because of its constant competition between corporations which inspires efficiency and new products, and because the owner invests majority of the profit back into the company. On the other side of the scale, it also dehumanizes workers and instills job alienation or deprivation of jobs during repetitive times of depression because private owners own the means of production. Marx says the main basis for any Capitalist company is a surplus value, which is just that the money invested into the company is less than the money produced as a result of running the company. Surplus value is a direct cause of surplus labor, which is that the cost for a worker to survive is less than the amount of work a worker can achieve. This also leads to a thought of workers as capital, which also dehumanizes them. Marx notes that Capitalism is prone to problems and fluctuation and that the rate of profit will fall even when the economy grows and that they would invest more in new technology and less in labor. Because of this the proletariat class declines as the bourgeoisie builds up increasing the separation between classes.

Marx was deemed a non-religious man, when in turn he can be looked upon as religious because of his pure commitment to those that are truly in need of it. That dedication that was provided by Marx was caused by both reason and faith. He was a true and good man at heart who was only misconceived about religion.

Search the Web for More information on Karl Heinrich Marx at LookSeek.com Search