Back To Category Kansas
Title : 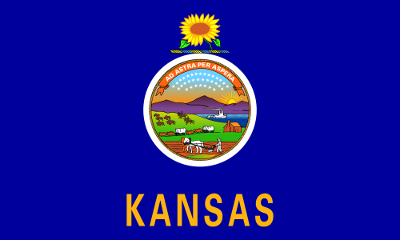 Kansas, which is shortly mentioned as KS, is one of the 50 states of the United States, situated in the Midwestern part of the United States. It is surrounded by Missouri in the east, Colorado in the west, Nebraska in the north and Oklahoma on the south. The state is named after the Kansa Native American ethnic group, which occupied the area. Occupants of Kansas are known as Kansans. The current Kansas State was home to several and different Native American ethnic groups for thousands of years. Usually, tribes in the Eastern region of the state lived in villages beside the river gorges, whereas tribes in the Western region of the state were semi-roaming and hunted big groups of bison. The Kansas state was initially developed by European Americans in the 1830s, but the speed of settlement went faster only in the 1850s, in the middle of political wars over the slavery problem.

Kansas was the 34th state admitted to the union on the 29th of January 1861. The total land area of Kansas is 82,278 square miles, which offers the state an area rank of 15 out of the available 50 states in the United States. In addition, water surface occupies 516 square miles of the total area of the state within its boundaries. There are 105 counties in Kansas among which the Grant County and the Logan County were recently formed in the state in the year 1888.

As of 2010, there are six State Electoral Votes in Kansas. The State Quarter issue Date of Kansas is August 29, 2005. “To the stars through difficulties” is the state motto of Kansas.

When the state of Kansas was officially planned as a state by the United States government in 1854, pro-slavery migrants from adjacent Missouri and abolitionist Free-Stators from New England rushed to the state to decide, whether Kansas would turn out to be a slave state or a liberated state. Thus, the region was a breeding ground of hostility and confusion in its beginning days because these forces crashed, and was identified as Bleeding Kansas. Finally, the abolitionists succeeded and Kansas came as a free state into the Union on the 29th January 1861.

Search the Web for More information on Kansas at LookSeek.com Search