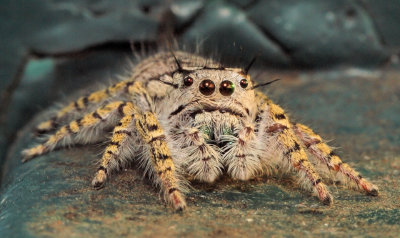 Facts about Jumping Spider, "scientific name for Jumping Spider is Phidippus mystaceus". Do you have any idea about jumping spiders? Well if not, here are some facts that you should know about them, they are called jumping spiders simply because they can jump 10 to 40 times their body length, they consist of 4000 described species and this makes them the largest family of spiders, they have a sharper vision than any other animal of its size since it has large principal eyes, the jumping spider has four pairs of eyes.

The jumping spiders vary widely in colors but many of the species are brightly colored with short legs, stout bodies and strikingly patterned, the jumping spider has the ability to identify their prey from up to (30 cm) away, it's jumps are accomplished by use of muscular contractions in the body, and this force the body fluids to move into the legs and this makes their legs to extend rapidly hence making them jump. Most of the Jumping Spiders feed mostly on insect.

The female Jumping Spider lays the eggs under stones, barks, surfaces of plants or silk lined shelter after mating. The female’s role is to guard the newly hatched and the eggs. All types of jumping spiders are seen to be poisonous except the uloboridae and they can cause redness, irritation and localized pain around the bite, the jumping spider lives on average of 2 to 3 years.

In order to facilitate their movements on the ground they have tiny hairs in their feet which split into more tiny hairs, and each tiny hair has an end foot which allows the spider to move over any surface at an angle, they are most likely to be found in areas such as desserts, mountains, temperate forest and scrub lands. In addition the jumping spiders use their silk for safety lines while jumping.

Jumping Spiders have oversize brains.
In the Jumping Spider the oxygen is bound to "hemocyanin" a copper-based protein that turns their blood blue, a molecule that contains copper rather than iron. Iron-based hemoglobin in red blood cells turns the blood red

A Jumping Spiders stomach can only take liquids, so a Jumping Spider needs to liquefy their food before they eat. They bite on their prey and empty its stomach liquids into the pray which turns it into a soup for them to drink.

Search the Web for More information on Jumping Spider at LookSeek.com Search