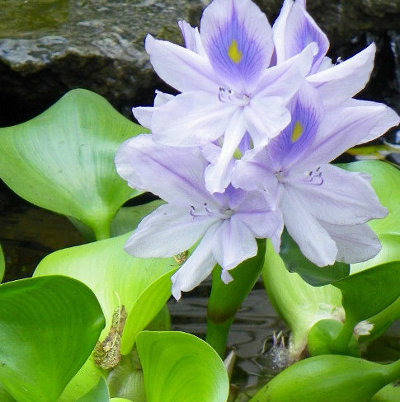 A beautiful plant for the water garden. Water hyacinth is a native to South America, but has been introduced to much of the Southern U.S. The Family classification is Pontederiaceae. The only large aquatic herb that can float on the water without being attached to the bottom. It can grow to a height of around 3 feet. A single plant under good conditions can produce 3,000 other water Hyacinth in 60 days, and can cover an area of 7000 sq feet or 600 sq meters in a year. This perennial plant floats on bloated air filled hollow round waxy green leaf stalks which the name derives from that means (pregnant tuber). The thick, heavily branched, dark root system trails underwater in dense mats. If these mats cover the entire surface of the pond it can become a problem with oxygen depletion which can end up killing fish. The Water Hyacinth can withstand many different water conditions that allows it to grow and spread rapidly in freshwater. It can withstand extremes of pH level, temperature, nutrient supply, and even grow in toxic water. It grows best in slow moving water or still water. The violet to light blue 6-lobed flowers located on a end spike and helps keep pond water clear. Know your state laws. Water Hyacinth is restricted to be sold in SC, AZ, CA, PR, TX, LA, AL, AR, FL. Never release these plants into public lakes or waterways.
All aquatic plants provide habitats for many macro and micro invertebrates. These invertebrates are used as food by fish and for other wildlife, such as ducks, reptiles, amphibians and more. After aquatic plants die, when it decomposes the bacteria and fungi provides food called (detritus) for many aquatic invertebrates. Water hyacinth has no known direct food value to wildlife and is considered a non nutritious food.