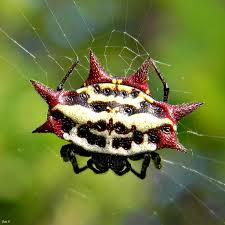 Facts about Jewelled Spiders, "Scientific name for Jewelled Spider is Gasteracantha cancriformis". The Jewelled Spider, has a number of other names such as the Jewel spider, star spider, spiny orbweaver spider and smiley faced spider. Its Latin name means belly of thorns. The Australian species is sometimes called Cat-faced Spider.
The species has these names because it has six spines projecting out of its back and a dot pattern reminiscent of a jewel or, in modern terms, a smiley face. The spines may be red or black if the Jewelled Spider’s back is white. The spines are always black if the Jewelled Spider is yellow.
Female Jewelled Spider are 1/5 (.51 cm) to 1/3 (.76 cm) and half an inch (1.27 cm) wide. Their legs are unusually short for spiders.
The Jeweled spider has a very wide range. They are found in the southeastern United States, Central America and Australia. The North American speices is called Araneus gemmoides. Austracantha minax, also called the Jeweled spider, lives only in Australia. However, all Jeweled spider species only live in tropical and sub-tropical areas.

Jewelled Spiders have oversize brains.
In the Jewelled Spider the oxygen is bound to "hemocyanin" a copper-based protein that turns their blood blue, a molecule that contains copper rather than iron. Iron-based hemoglobin in red blood cells turns the blood red

Jeweled spiders create circular webs to catch their prey. They are located three to six feet (.91 to 1.82 meters) above the ground, and they usually catch flying insects like flies.
The Jeweled spider tends to live in woodlands, and they are often found in orchards.
The Jeweled spider only lives long enough to reproduce. The females die after laying their eggs. Males die even sooner, a few days after mating, in those cases where he wasn’t eaten by the female.
Most Jeweled spiders typically live solitary lives, though the Christmas spiders (the Australian species Austracantha minax) live in communal webs. In some areas, their webs may overlap. The Jeweled spiders are unusual in that they will share prey that land on their webs.
Jeweled spiders, no matter the species, are not poisonous to humans.

A Jewelled Spiders stomach can only take liquids, so a spider needs to liquefy their food before they eat. They bite on their prey and empty its stomach liquids into the pray which turns it into a soup for them to drink.

Search the Web for More information on Jewelled Spider at LookSeek.com Search