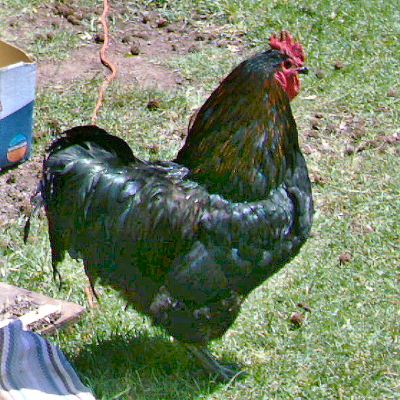 First, there exists three variety of the Jersey giant chicken, the Black Jersey, the White Jersey, and the blue Jersey. Back then they were raised as broilers and capons. It is the largest purebred chicken and a mature rooster weighs about 11 to 15 pounds (4.9 to 6.8 kg) and is averagely 24 inches tall (60.9 cm). A Jersey Giant hen weighs on average 10 pounds (4.5 kg) and is about 18 inches tall (45.7 cm).

The Jersey giant chicken has yellow skin color, it has a single red comb, and it is clean legged. Generally the Black Jersey is quite heavy compared to the White variety.

The Jersey Giants are quite calm and very docile chicken breed. The cock despite its massive size, it’s rarely aggressive.

The Jersey giant chickens will always seem to have a slow growth rate, but in actual sense they grow as fast as the other pure breeds. Generally they are quite huge compared to the other breeds and in essence they take quite a long time to reach maturity with is often 8 – 9 months.

Because of their great size, the Jersey giant chickens are less flighty so they don’t need tall fences or pens.

Search the Web for More information on Jersey Giant Chicken at LookSeek.com Search